Juice Newton: What the doctor ordered

Juice Newton, to be specific, a lovely lady who has been on the scene since the mid-1970s as a singer who got her performing start in Virginia Beach.

Along with Exile, she will be in concert Oct. 25 at the Suffolk Center For Cultural Arts and, among other songs, you will hear such hits as “Angel In the Morning,” “Queen Of Hearts,” and “The Sweetest Thing (I’ve Ever Known).” 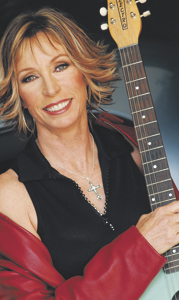 Juice Newton will perform on Saturday at the Suffolk Center for Cultural Arts. She says Bob Dylan is her biggest inspiration, and she does power-lifting in her spare time.

She talked to me from her San Diego home and, before going any further, I want to tell you a story I related to her during the phone call to set up the interview.

Many, many years ago I was at a concert in Hampton Roads that featured Judy (her real first name). I was thoroughly enjoying her efforts, and I told my wife something to the effect that it was a great concert, and Newton a fine performer.

A few seconds later, the man sitting on the aisle seat in the row in front of me turned around and proudly let us know, “That’s my daughter.”

When I talked to her the second time, she let me know how much she appreciated the story about her naval officer dad, who passed away some years ago.

It was a return to Hampton Roads that concert day. She was a graduate of First Colonial High School in Virginia Beach, where she was — no surprise — a member of the choir. That’s where she got her start as a solo performer, too.

“It was a place called The Coffee House,” she noted, and it lived up to its name. “They served coffee, no liquor.”

Juice began singing professionally when she was 13 years old. “I started getting paid to sing,” she told reporter Greg Archer. “I thought that was wacky.”

Next on the agenda was forming her own band, Juice Newton and Silver Spur. The climb began — major labels, top-40 hits, gold and platinum records.

There was pop music, country, folk and everything in between.

“My biggest inspiration was Bob Dylan,” she said. “He had a terrific career. I liked his interpretation of the world. His storytelling songs were an inspiration for me.”

Like that icon, the Juice is multi-talented — singer, songwriter, guitarist. Unlike many singers who were stars several decades ago, she is not dissatisfied with today’s music scene. “It’s better. You have larger audiences, you have the Internet — there are so many ways to get exposure, and you’re not controlled by just a handful of major labels.”

Two of her current favorites are Pink and Katy Perry. But unlike many of the day’s current stars, she is not a candidate for the likes of the National Enquirer.

The first named is a major family hobby.

“My son and daughter and I show horses, and we all play polo. It’s a great hobby, and I teach riding.”

Thanks to the equines, she met her husband with the wonderful name of Tom Goodspeed. In ’83 she stabled a thoroughbred gelding at the Los Angeles Equestrian Center, run by Mr. G.

He admired the horse and its pretty owner, and he asked her for a Disneyland date.

Later, he admitted being a bit naive. He didn’t realize that you don’t take a major celebrity to such a place. Juice turned the tables on him, and asked him to go to a party with her.

The couple have two children — Jessica, 9 and 6-year-old Tyler.

The other hobby involves animals.

While the animals loll about the Goodspeed San Diego home, Newton is hitting the road with Exile. So, take your doctor’s advice — you know, when he recommends more Juice.