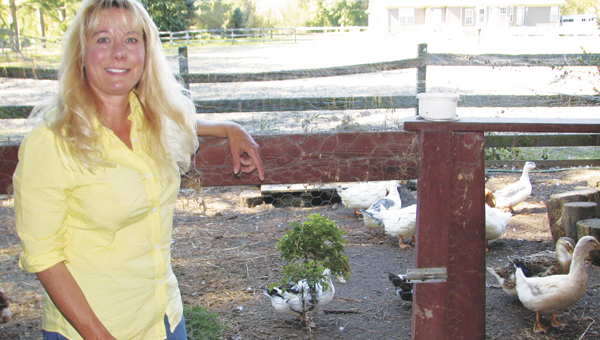 Lisa Steele shows off the chicken and duck coop on her small Gardner Lane farm. She has written a book for people who are looking for advice caring for their own chickens.

After growing up across the street from her grandparents’ chicken farm, Lisa Steele took to the fowls naturally when her husband proposed them as a compromise to the goats she wanted to get.

“I’m not one to say no to any animal,” Steele said.

The couple, who live on six acres on rural Gardner Lane in northwestern Suffolk, already had horses, dogs and cats. Chickens and, later, ducks also, seemed a natural addition.

“As soon as we got them, I didn’t realize how much I had picked up” from when she was younger, Steele said.

But when she went looking for answers and advice, the only books she found recommended the use of chemicals, medications and other things she considered unhealthy, both for the chickens and for the people eating their eggs.

“Why would you want fresh eggs if you’re going to pump them full of antibiotics?” she said.

Steele keeps her chickens and ducks in a large cage during the day to protect them from hawks and foxes, which frequent the area, she said. In the late afternoon, when the predators are less active, she lets them out and allows them to poke around, eating bugs and weeds. Steele also gives them organic chicken feed.

The fowls instinctively know to let themselves back into the coop at dusk, Steele said.

“They’re happy for the most part,” she said. “And they’re pretty low-maintenance.”

A former accountant on Wall Street, Steele has parlayed her hobby into a second career. It began on a Facebook page she started to give advice to other chicken-keepers. But she found that she was “typing the same answers to the same questions again and again,” she said. So she started a blog so that she could direct people to links that answered their questions.

Soon, she started accepting sponsors on her blog, getting paid for her hobby, and eventually she wrote a book. The book, released about a year ago, has stayed near the top of the “chicken care” rankings on Amazon since its release.

Titled “Fresh Eggs Daily,” the book gives advice on caring for chickens naturally and touts the benefits of fresh eggs from one’s own flock — they are fresher, more flavorful and not as runny, Steele said. She gets about five to seven eggs daily from her 13 chickens.

“Once you have them, you’ll find that you eat more eggs,” she said, noting that she can’t stomach eggs from the store or a restaurant anymore. “They can be six weeks old by the time they even hit the store.”

Steele encourages anyone who lives in the right zoning district to give chickens a try.

“I think more people should do it,” she said. It’s a fun little hobby, for sure.”

The book can be purchased at www.fresh-eggs-daily.com, or at online retailers.

Juice Newton: What the doctor ordered