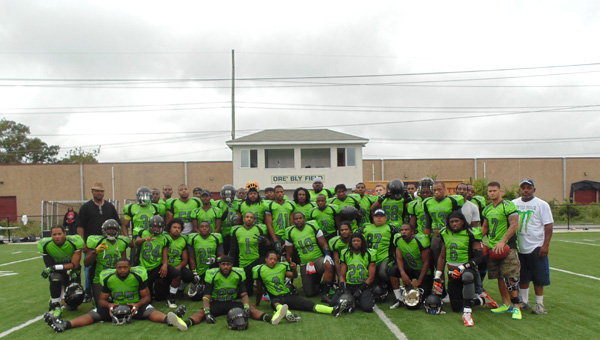 The semi-professional football team still recognized as the Suffolk Chargers by the Atlantic Coast Football Alliance has undergone a significant transformation since the last season it was in action.

And though it lost 20-16 to the Tri-City Bulldogs on Saturday, the team now known as the Suffolk Charging Warriors holds a winning 4-3 record during the ACFA’s fall season.

The Suffolk Chargers merged in June with the Virginia Warriors, a team with players largely from Hampton and Newport News.

Prior to the merger, Charging Warriors coach Jay Watkins said, “I was contacted by (the Chargers’) then-head coach (Tony) Bateman, and he was saying, well, they don’t have many players.”

Watkins was coach of the Warriors and was facing the fact that his team, too, was not very deep. He estimated he had 25 to 26 players by last season’s end and that the Chargers might have had 17 or 18 players around the same time.

When the possibility of a merger was suggested, Watkins said, “We were a little reluctant to do it at first,” not really knowing how it all would work out.

Watkins would remain head, coach since Bateman is busy as an assistant coach at Deep Creek High School in the fall. But the merger also held the promise of lightening the load of responsibilities Watkins carried, since a Warriors co-owner was not handling the business side of the team.

“He didn’t really take care of his task like he was supposed to, so I kind of did everything,” Watkins said.

Watkins and Chargers owner Angela Harper came to an agreement: “I would handle football operations, and she would do business,” he said.

Owners and coaches met in June to put the arrangement in writing, and the teams had their first joint practice several days later.

Harper said she made the name change from Chargers to Charging Warriors because “I was trying to keep them from losing their name.”

Watkins had the challenging task of combining the two rosters and making it work, but Harper said, “I have to really give it to him. He knows what he’s doing.”

To deal with a roster of players living in disparate locations, the Charging Warriors alternate practices in Suffolk and Hampton.

The other difficulties came in meshing personalities and talents, as some players may no longer get as much playing time at a particular position anymore.

“Look at the San Antonio Spurs,” Watkins told his team. “Those guys are selfless, and they want each other to succeed.”

As he preached this team-first mentality, he said, “Some of the guys started to buy into it.”

Among the team’s standouts this year are free safety Neil McCoy, with five interceptions, and strong safety Mark Granville with three interceptions, two of which he returned for touchdowns.

Quarterback Leonard Diggs has passed for nine touchdowns and run for about 300 yards, with a touchdown.

“We have a lot of talent, and when we got together, we had championship aspirations, and we still feel like we can accomplish those goals,” Watkins said. “Nothing has really deterred us from that.”

The team faces the Virginia Swarm (3-4) on Saturday at Kecoughtan with a 3 p.m. kickoff.