Saints get in their own way

For about 17 minutes of the second half on Friday night, nearly everything went right for Nansemond-Suffolk Academy’s football team. And then the Saints got in their own way.

Trailing 28-12 at halftime, NSA rallied for its first lead of the game, 36-35 with 7:04 remaining in regulation. Visiting Trinity Episcopal School responded with a touchdown about three minutes later but could not convert for two, leading 41-36 with 3:52 left. 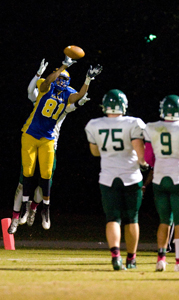 It seemed everything would come down to one last offensive stand to give the Saints their surest shot at a playoff spot.

But on the second play from scrimmage, the ball popped up in the air during a run, and Trinity Episcopal recovered the fumble at the Nansemond-Suffolk 35-yard line. The Titans scored a touchdown to create a 48-36 victory.

The worst was on display in the first half when the Saints committed three turnovers, including a fumble on their opening drive, which gave the ball to the Titans on NSA’s own 30.

Nansemond-Suffolk junior running back Noah Giles helped his team respond quickly, scoring via a 64-yard run on the first play of the Saints’ next drive. The two-point conversion failed, however, still leaving NSA behind, 7-6.

Trinity built on their lead with an 11-play, 58-yard drive that was capped with a 12-yard touchdown pass from Bowen to junior wide receiver/tight end Trevion Armstrong.

The Saints thwarted themselves on their next two drives, first with an interception and then with a fumble. NSA’s defense helped keep the Titans from turning the interception into points, but senior defensive back Rimoni Dorsey returned the fumble 77 yards for a score.

Then something changed in Nansemond-Suffolk’s performance.

“We just started executing,” Johnston said. “When we play error-free football, we can play with anybody.”

The NSA defense forced the Titans to turn the ball over on downs. The Saints then put together a 14-play, 52-yard drive that lasted six minutes and ended with a one-yard touchdown run by Gough. This time, he made it into the end zone on the two-point conversion, as well.

Nansemond-Suffolk covered 60 yards in nine plays, and Giles scored his third touchdown of the game on a four-yard run. Gough, again, scored on the two-point conversion to make the score 28-28 with 27.6 seconds left in the third quarter.

The Titans were able to get their offense going and score on their next drive, but they only went for an extra point, which gave NSA the advantage when Gough scored in the fourth quarter on a 25-yard run, and followed it up with a three-yard pass to junior tight end Eric Teumer for the two-point conversion.

After Trinity Episcopal went ahead 41-36, the Saints offense looked to sustain its momentum. Despite a stellar second half, Gough fumbled on the second play of the drive.

For the game, he ended up with 20 carries for 116 yards, two touchdowns and a pair of two-point conversions. Giles had an impressive 115 yards and three scores on only 11 carries.

Nansemond-Suffolk’s playoff destiny is not entirely in its own hands at this point as it waits to see what happens with Trinity Episcopal, The Potomac School and Randolph-Macon Academy in the final games of the season.