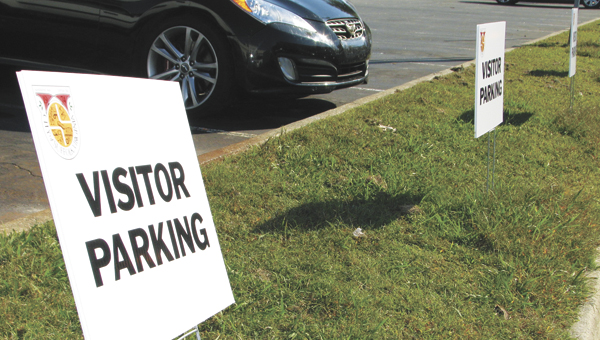 New signs at the Morgan Memorial Library designate more than a dozen parking spots for visitors.

The city has designed more than a dozen spaces at the Morgan Memorial Library as visitor spaces in hopes it will alleviate parking issues in the area.

“The whole idea was to keep as many spaces available for the public as possible,” said Gerry Jones, the city’s Capital Programs and Buildings director. “Everybody’s trying to park everywhere.”

Jones said the visitor spaces are available for patrons of the library or City Hall, which is directly across the street. The idea is to keep staff members, who would be taking up the space all day, from using them.

“People coming to City Hall are not staying there,” Jones said, noting most people have business that takes only a few minutes.

In addition, visitor parking is available in a new North Street lot just east of the new city hall building.

“The idea is to get the visitors as close to the front door as possible and keep the staff in the old lots across the street,” Jones said. “We’re encouraging staff to continue to park at the (Human Resources) building and the main staff lot.”

The parking situation should be completely alleviated once the old city hall building is demolished and a parking lot is built in its place, but it will be a while yet before that takes place.

City departments that have offices other than in City Hall — including the sheriff’s office and voter registrar — have been choosing furniture out of the old building, Jones said. The purchasing department is taking inventory of what’s left and preparing to auction it.

The building will be turned over to the demolition contractor near the end of January, Jones said. Hazardous materials abatement will take about a month and a half, and then demolition will take place.

The completion of the police department’s headquarters expansion also will free up spaces, Jones said. That should be done around the end of the year. Once that’s finished, the spaces the city is leasing from West End Baptist Church for the police department will continue to be city spaces for other departments during the week.

“Things will get better as time goes on,” Jones said.