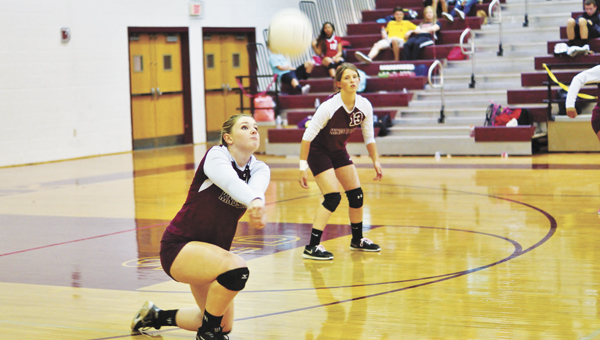 “Thursday’s performance, it was really good,” Bulldogs coach Angelique Gatling said. “It turned out to be as I expected.” 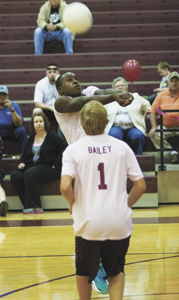 King’s Fork High School’s Aireon Leary sends the ball over as Cole Bailey looks on against visiting Nansemond River High School during the Bulldogs’ 3-1 win on Thursday. King’s Fork finished 11-0 in the conference for the regular season.

King’s Fork came up short in the first game, but Gatling figured that was because her team did not initially feature its normal starting lineup. She made the change for disciplinary reasons after team rules were broken.

“There’s no slack ever taken on that,” she said.

Contributing in a variety of ways for King’s Fork was Cal Bailey with six kills, 25 assists and four aces, while Aireon Leary had seven kills, three assists, four aces and one block.

“I always ask for 150 percent from them and when they show stats like that — a team effort — that’s when it shows that they gave 150 percent,” Gatling said.

For the season, the win put the Bulldogs at 16-6 overall and 11-0 in the conference.

“The 16-6, actually I’m disappointed in that, because a lot of the teams that we lost to, we didn’t lose by a big gap,” Gatling said. “We kind of gave it away.”

The 11-0 conference mark was more expected.

“We had expectations to go undefeated,” she said. While she said her players did not understand why she pushed them so hard, “I wanted them to believe in what they can do.”

The boys’ volleyball conference tournament begins next week and will be held at Nansemond River High School. As the No. 1 seed, King’s Fork will get a first round bye.

“Conference tournament may be a little tough because we have a lot of teams now that want us,” Gatling said. “It’s not going to be easy.”

The King’s Fork girls’ volleyball team will also be the No. 1 seed and finished their season 12-9 overall and 9-1 in the conference after defeating the Lady Warriors 3-1 on Thursday.

Lady Bulldogs coach Sarah Porter has been absent for a brief period of time after giving birth to a boy on Oct. 14, but she was in attendance on Thursday and liked some things she saw.

“The fourth game, Cydney (Nichols) and Taylor (Harrell) really stepped it up,” she said, noting the latter contributed significantly with good serving.

Porter is particularly pleased with the first place regular season finish in the conference. She had told her players that she expected nothing less than that.

“I know they were capable of it,” she said. “I’m extremely proud of them just because I know how hard on them I’ve been.”

Also knowing that her being away part of the time was an added complication in their season, she said, “They’ve really stepped up and done a good job of holding things together when I’ve been gone.”

Turning her sights to the conference tournament, Porter said, “I think every game is going to be a challenge for us,” but her high expectations will continue.

The girls’ volleyball conference tournament begins next week and will be held at Heritage High School.