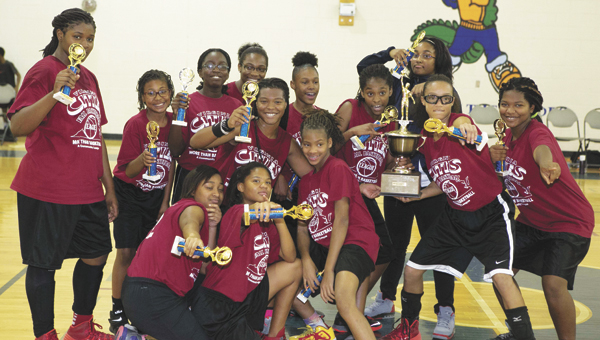 Few thought that 2014 was going to be the Suffolk Lady Storm’s year in the Virginia Cities Fall Basketball League. After all, they only returned three players from last year’s dominant squad that blew through the competition and won assuredly in the league championship.

But a largely new group of girls stepped up this year and did not simply help the Lady Storm have a solid season — they also brought home another league championship on Saturday.

“I’m so proud of all my athletes, and they’ll have a special memory of having success in competition,” Suffolk coach Tom Lewis stated in an email.

He noted this year’s win was special to him because of the initially unforeseen nature of it.

“I think the general consensus was we were not expected to win, and these girls believed they could,” Lewis said.

After last year’s 9-1 juggernaut of a team, even Lewis was not expecting a repeat performance. But he said, “Once the girls started winning games and they put themselves in the position to be in the championship game, I was right there with them.”

From all appearances, Saturday’s tournament at Creekside Recreation Center was supposed to belong to Virginia Beach, a team that had only lost once this year — a forfeit brought on due to a miscommunication over scheduling.

Suffolk began Saturday with a 41-26 quarterfinal victory over Hampton 2, which used three-point shooting to make things close in the second half. However, the Lady Storm closed out the game with pressure defense. Seventh-grader Lanae Stokes had 14 points, eighth-grader Nylah Young had 11 and seventh-grader Makaylen Davis added seven.

In the semifinals, Suffolk outlasted Hampton 1 by the score of 46-31, as Young led the Lady Storm with 17 points and Stokes and Davis contributed 12 apiece.

Virginia Beach started the title game strong, leading by double figures for most of the first half thanks, in part, to four three-pointers. Suffolk pulled off a 6-2 run to make it 27-19 at halftime, at which time Young had eight points.

The Lady Storm sustained some momentum in the third quarter and only trailed by two entering the final period.

“This was special because of the way they finished,” Lewis said of the win.

Suffolk got its first lead of the game with less than two minutes left on a floater by eighth-grader Neecole Brown.

Because of a conflicting engagement, Brown missed the last three quarters of the quarterfinal and the entire semifinal, but she was back for the championship.

“Obviously, we’re a better team with her,” Lewis said.

In the waning moments, with her team holding on to a one-point lead, Nylah Young committed a foul to prevent an easy shot attempt. It was ruled an intentional foul, meaning Virginia Beach would get two free throws and then the next possession.

Both free throws failed to find the bottom of the net, and then Virginia Beach missed a shot on its ensuing possession, and the Lady Storm controlled the rebound.

Lewis wanted to run time off the clock, so he held off his team from shooting. After some great passing that kept Virginia Beach scrambling, the ball went to Stokes behind the three-point line.

“Lanae’s been clutch for us all year,” Lewis said. “She had a good look, and she stroked it, and man, when it went in, my heart about came out of my chest.”

It essentially ended the game as Suffolk went on to win 46-42.

Seventh-grader Tatianna Johnson was a prominent difference-maker for the Lady Storm in the second half, playing turnover-free basketball and outstanding defense that opened up opportunities for points in transition.

Lewis planned to give Johnson a breather and re-insert starting eighth-grader Aleemah Johnson, but she selflessly told the coach to keep Tatianna in.

“She had the foresight to see that, ‘Hey, the team’s playing well. Don’t change anything,’” he said.