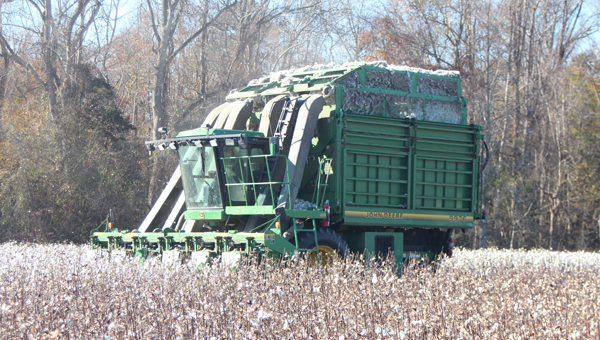 Bundled up against the fall cold snap, farmer Shelley Barlow stood on the platform at one end of a module builder Friday as her husband emptied the picker’s basket of soft, white bolls.

With a module builder either end of the harvest’s second-to-last cotton field, on Cherry Grove Road North, Joe Barlow disgorged the six-row picker after each half-mile swipe of the 20 acres.

Cotton is now bringing farmers like the Barlows less than 60 cents per pound — half as much as two years ago.

And that isn’t an isolated downward trend. As the 2014 harvest draws to a conclusion, farmers are reporting decent yields but sagging prices.

Shelley Barlow said that hurts. But the fact that the crop is decent helps make up for it, she added.

“In the past three or four months, everything has just gone to pack,” she said of commodities in general.

After the final 10-acre field is picked, the Barlows will have harvested about 375 acres of cotton. They began the task Oct. 21, Shelley Barlow said.

It hasn’t been solid harvesting. The cold biting Shelley Barlow as she controlled the movement of the hydraulic compressor back and forth and up and down, to eventually form a module of about 20,000 pounds, has meant some late starts.

Plus, they share the picker and some other farm machinery with another farm.

Reached by phone Wednesday, another Suffolk farmer, David Bosselman, expected his family would finish picking close to 700 acres of cotton this weekend.

His two sons were each on a picker while he operated a combine in a soybean field. “We’re hard into the soybeans right now,” Bosselman said.

Echoing Shelley Barlow, Bosselman said this year’s had been one of their best cotton crops ever.

For the most part, the soybeans also look good, he said, though patches were drowned out earlier in the season.

They’ve finished harvesting a good crop of peanuts, which also graded well to bring a higher-than-average price, while the corn was a bit worse than last year but still good, Bosselman said.

“The only thing I can say with the crop is the prices of commodities are falling,” he said. “It just tightens up your margins and profits. (But) we’ve had a good crop to help compensate for some of that.”

Due to shortages during recent years, soybean prices are holding up better than other commodities, Bosselman said. He said he locked in a price for half of his expected soybean yield early, and will store the rest in the hopes of a price rise by the late winter or early spring.

Though it has caused some later starts, the recent cold hasn’t hurt the cotton harvest, said Marcus Williams, the agricultural extension agent for Suffolk.

But rain can affect quality and lower prices if the modules sitting in fields before they can be transported to the gin aren’t packaged well enough.

But Williams doesn’t expect that will be a problem in Suffolk. “Everything’s packaged pretty good,” he said.

“Most people have a system, and if you can spend a little bit more on your tarps, that will protect your investment.”

Besides the cotton, corn and soybeans, the Barlows have also harvested 200 acres of Natto soybeans, which they sell at a premium for export to Japan and Korea.

When harvest is done in the next week or two, one of the next tasks for farmers will be deciding the 2015 crop rotation.

“Some of it is what’s going to make the most money; some what is best for that particular field,” said Shelley Barlow.