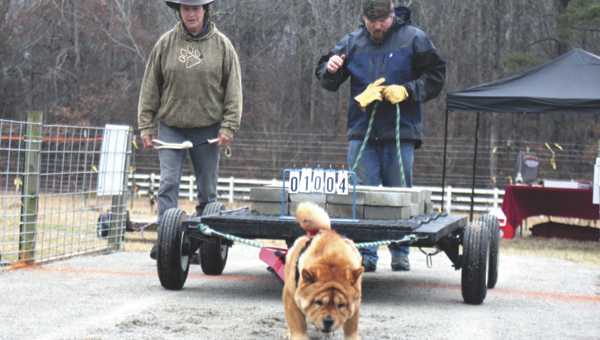 During a dog pull on Saturday, Chow Chow “Syd” puts his muscles into it. Mid Atlantic Weight Pullers members meet in Suffolk up to 10 times each season to put their pooches to the test.

Chuck Coffey secured the wagon laden with pavers to a sturdy harness.

Inside the sturdy harness was “Jade.”

Coffey’s old English bulldog started in dog pulling about six months ago. She was among a large contingent of canines and their owners on Saturday at Epps Farm Supply.

It was one of up to 10 Mid Atlantic Weight Pullers events held in Suffolk annually, said Debbie Lee, referring to herself as the group’s organizer.

Most members come from Hampton Roads, she said, but some are from as far away at Pennsylvania and Delaware.

What unites them is the thrill of witnessing their four-legged friends — the pastime is open to all breeds — perform feats of strength.

Coffey stood up one end of the strip of hard-packed earth, coaxing Jade to give it her all.

Slowly but surely, the bulldog heaved the heavy wagon from the starting line to the finishing line, 16 feet away. She successfully pulled 2,186 pounds within the required 60 seconds.

“It’s not about the politics,” said Coffey, who also shows his dogs, of what attracts him to dog pulling. “It’s can the dog do it or not.”

Lee said the group has been around for more than 20 years. “But we only got ourselves an official name four years ago,” she added.

The season runs from Labor Day to the end of April or beginning of May, Lee said. Events consistently attract 15 to 20 people.

Dogs earn points throughout the season, and those with the most at the end are invited to attend the annual championships.

Those dogs are considered the best of the best out of 11 International Weight Pull Association North American regions and one in Hawaii.

“It’s just an off-season way to keep them in shape when they’re not pulling sleds,” Lee said of how it all got started.

Alaskan Malamutes and huskies were the pioneering breeds. Originally from Suffolk, Lee said she had the first pulling dogs in the region 20 years ago with St. Bernards.

“I always get rescue dogs,” she said. “Right now I have a hodgepodge of different dogs.”

Carol Dodds, of Hobbsville, N.C., who specializes in making the harnesses for the Mid Atlantic group, said she has been into dog pulling for “quite a while.”

“On a good day, he’s awesome,” Dodds said of her 4-year-old Jack Russell “Lenny,” another competitor in Suffolk on Saturday.

The muscles in Lenny’s chest popped and the dirt beneath his paws churned as he executed one successful pull.

One early star of the event, which was to continue Sunday with the larger dogs, was Chow Chow “Syd.” “This is his first pull season. He surprised me,” said his owner, Chris Hockaday.