A woman raised in Suffolk during the Great Depression, who was crowned Miss Virginia and acted on Broadway after being discovered by Rodgers and Hammerstein, has died in Connecticut at age 95. 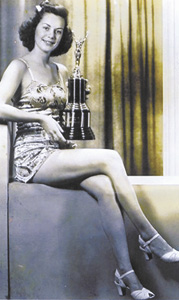 Born and raised in Suffolk, Rose Marie Brown was Miss Virginia in 1939. She died last week at 95.

“He built the Elliott Hotel and a whole bunch of stuff around Suffolk,” Josh Brown, one of Rose Marie Brown’s two sons and a financial adviser in Henniker, N.H., said of his grandfather.

In 1939, Rose Marie Elliott won the local pageant, her son said. He couldn’t confirm that she was crowned Peanut Queen or an equivalent; he recalled her saying she was Miss Peanut.

Subsequently crowned Miss Virginia, she participated in the 13th Miss America pageant, which was the final one held at the storied Steel Pier in Atlantic City, N.J.

Rose Marie Elliott was fourth runner-up. (The winner, Patricia Donnelly, died just shy of her 90th birthday in 2009, according to missamerica.org.)

In the Atlantic City audience, Josh Brown said, was Maynard Morris, a talent agent with MCA. He told Milton Elliott, “She’s got talent — you should send her to New York City.”

Milton Elliott did just that: Rose Marie Elliott, who earlier had attended Simmons College in Virginia, enrolled at the American Academy of Dramatic Arts, which was housed in Carnegie Hall.

Fate would have it that when she went with a roommate to an audition one day, Richard Rodgers and Oscar Hammerstein II were in the audience. Spotting talent, Brown said, they invited Rose Marie Elliott to their office the next morning.

Her first Broadway play was “One Touch of Venus,” with Mary Martin. Later, alongside a host of others, came “Annie Get Your Gun,” with Ethel Merman and Bert Lahr, who played the Cowardly Lion in 1939’s “The Wizard of Oz.”

After meeting W. Donald Brown — who died in 1999 — at a party, she soon became Rose Marie Brown.

Rose Marie Brown lived in Stamford, Conn., and was previously a longtime resident of Darien, Conn.

Josh Brown said that living in Suffolk as a girl, his mother was insulated from the economic turmoil gripping the nation.

“There were cooks — all that kind of stuff,” he said. “She lived a little bit of a sheltered life during the Depression.”

Her brother, Bruce Elliott, lived in Suffolk until his death 10 or 15 years ago, Josh Brown said. “When she talked to him on the phone, she would talk like a Southern belle for about a week. Then she would go back to the Yankee drawl.”

Rose Marie Brown, who died in her sleep at Edgehill in Stamford, Conn., Jan. 19, was a longtime member of Wee Burn Country Club and attended an Episcopal church.