Brits blow in to town 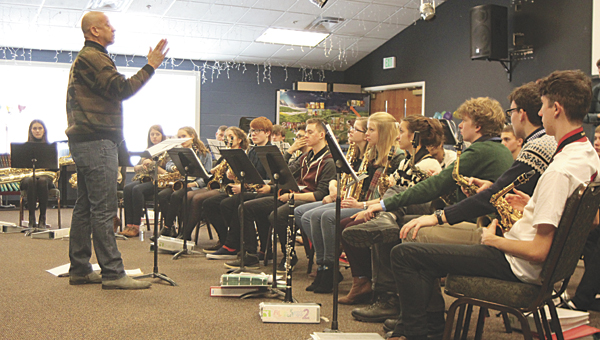 At Westminster Reformed Presbyterian Church on Thursday, radio personality and musician Jae Sinnett offers some tips to swing band students from Suffolk, England. The students are in town as part of a cultural exchange program. Folks can sample their talents during a free concert at Nansemond River High School on Monday night that will also include a selection of local students.

Their itinerary hit for six by the winter storm, a group of English teens in town as part of a cultural exchange program are keeping calm and carrying on.

On this fourth trip to Virginia, there are 27 students, one recent university graduate who came four years ago and decided he wanted to visit again, and six adult chaperones, said Maryanne Persons, president of Suffolk Sister Cities International.

Suffolk County, England and our fair city have been “sisters” since 1981.

“We had a detailed itinerary, but we have been unable to do any of the activities we have scheduled,” Persons said.

“I would say it’s not a total loss, because it’s a cultural exchange, and that goes on whether or not we are sightseeing. We are about getting people together, and instead of getting together in a museum or somewhere else, they are getting together in people’s homes.”

Persons said it was “very, very cold” when the students arrived in Washington on Saturday. “They were still able to get around and see things,” she said. “(But) we were not able to get up to the Washington Monument.”

The English then arrived in Suffolk in the midst of Monday’s snowstorm. Since those in Suffolk have been closed all week, they’ve been unable to experience the American classroom.

In fact, a workshop Thursday at Westminster Reformed Presbyterian Church with Hampton Roads jazz musician and radio personality Jae Sinnett — which was meant to happen Tuesday at the WHRO studios in Norfolk — was their first time together to wield their instruments since jetting across the Atlantic.

Plans for the week obliterated by the snow and frigid cold also included a social gathering at Persons’ house, pancake supper at Glebe Episcopal Church, trip to Jamestown and Williamsburg via the Surry ferry, and tours of the Windsor cotton gin, Suffolk Visitor Center, Planters Peanut Center and City Hall.

“We had a fantastic time in Washington,” said band director Tim Jenkins, looking on the bright side. “It was cold, but it was great. We went to the aerospace museum and had a great time. The (IMAX) film we saw on the Hubble was excellent.

“Of course, we came here, and the snow came with us.”

Obviously, Jenkins said, they’ve spent “quite a bit” more time with their host families than had been planned. “We are going to press on with what we can, and hopefully the weather will be a bit better,” he added.

Beginning at 7 p.m., the renowned English musicians will join with talented local musicians from each of Suffolk’s high schools for a free swing band and chorus performance.

“We still have rehearsals planned for Sunday afternoon,” Persons said.

It was also hoped that part of the itinerary could be salvaged on Friday. “It seems like everyone’s having a great time,” Persons added.