When she takes to the stage with “Sleeping Beauty” next month, a Nansemond-Suffolk Academy senior will continue a long association with Ballet Virginia International. 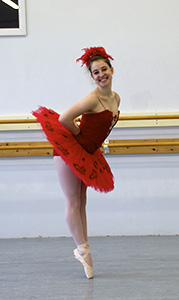 Nansemond-Suffolk Academy senior Caileigh Gold, who will perform in Ballet Virginia International’s “Sleeping Beauty” next month, strikes a pose in her fairy costume.

Caileigh Gold said she has performed in the Norfolk-based dance academy and performing company’s annual spring production “since I was young.”

“I have always been with Ballet Virginia International,” Gold said. “I do ‘The Nutcracker’ every year — I’ve done that for 11 years.”

Now 17, Gold began dancing at age 3. “My mom told me that I told her I wanted to start taking ballet lessons,” she said of how she got started. “I think it was because I liked the tutus and the pink.”

She believes she’s the first in her family to pursue ballet.

While the original choreography dates back to the Russian tradition of Victor Marius Alphonse Petipa — the latter decades of the 19th century — it’s being “restaged with (the) contemporary audience in mind,” according to BVI spokeswoman Lisa McCarty.

Gold plays the Songbird, one of six fairies. “We all bring gifts to the sleeping beauty,” she said. “We are basically guardians over her.”

The fairies dance at the beginning of the show and again at the end, Gold said. “We all have little solos to dance … and we all dance together, of course.”

When she graduates from NSA this year, Gold will join a ballet company in Princeton, N.J., as a trainee for two years.

It’s a dream come true for her.

“Ballet is the only thing I’ve every wanted to do,” she said. “I honestly don’t know what I would do without ballet, because I’m not really good with anything else.”

The spring production is coming together well, Gold said, though rehearsals have been “crazy” with the snow. She attends 22 hours of classes and rehearsals each week.

“It’s hard, but I think that’s one thing ballet has taught me most — how to use time wisely,” she said.