National recording artist Erica Lane spoke — and sang — to chorus students at King’s Fork Middle School on Monday, offering advice for those planning music careers of their own.

From Dallas, Texas, Lane is an acclaimed recording artist, vocalist and songwriter. At least a dozen of her songs have featured in television and films. 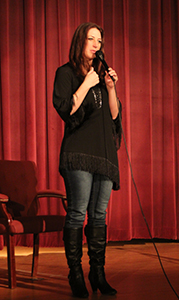 The 34-year-old spoke to the seventh- and eighth-grade students for the Jesus Princess Christian Womanhood Society, founded by Suffolk’s Princella Johnson.

Johnson approached the school about bringing Lane as a speaker, chorus teacher Joy Lawton said. “She (Lane) was very interested about coming and talking to the kids about what a performance artist does,” she said.

“They learn there are lots of opportunities through music — through recording (and) the media industry as well as performing.”

Lane, also a former Miss Houston, said she always knew she could sing. But selection for her high school’s all-star choir changed her life.

After studying music education at college, she got a job as a high school choir director. On her first day as a 23-year-old teaching 18-year-olds, other teachers asked her if she had a pass when she walked down the hall.

Lane said she taught for a year and a half, but “there was something boiling inside me,” a drive to create and record music.

So she decided she was going to record an album with 10 songs she had written. Then, she began offering to sing at friends’ churches, where she might receive donations and sell a few CDs.

That was eight years ago, and Lane now has five albums to her name in the adult contemporary and Christian genres, four of which were recorded in Nashville.

Two of her original songs were on the soundtracks of two theatrical movie releases, including “Left Behind,” staring Nicolas Cage, and a documentary, “Veil of Tears,” narrated by Natalie Grant.

Lane sang several of her numbers from the King’s Fork Middle School auditorium stage, including the patriotic “Believe in America,” tearjerker “Angels In The Snow,” and her latest single, “Burden,” written after a friend’s 15-year-old son died from a combination of bone cancer and Diamond-Blackfan anemia.

Lane coaxed a lot of questions from her audience, whose members learned she’s a fan of Harry Connick Jr., Martina McBride and Sarah McLaughlin.

When pressed to name a favorite rap artist, she came up with Eminem. When asked to name her favorite song by the Detroit native, she said she has a lot of respect for his talent but doesn’t spend all day listening to him.