The new company is the third-largest food and beverage company in North America and the fifth-largest in the world, according to a press release announcing the merger. 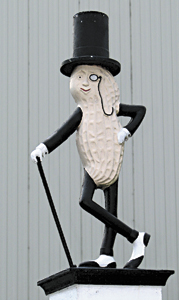 Several statues of Mr. Peanut, the advertising icon created in Suffolk, line the perimeter of the Planters Peanuts processing plant near downtown Suffolk. Kraft, which owns Planters, announced on Wednesday a plan to merge with Heinz.

Locals who deal with Planters said they expect and hope there won’t be any changes in Planters’ operations.

“We only know what we read in the paper,” said George Birdsong of Birdsong Peanuts, which sells peanuts it processes to Planters. “Hopefully, it will not affect our relationship with Kraft. We have an extremely good relationship with Planters Kraft, and I fully expect that to continue.”

The Planters factory is celebrating 102 years in Suffolk this year. The acquisition by Heinz is the latest in a history of them.

In 1960, Standard Brands acquired the vast majority of Planters stock. The two companies merged the next year.

Standard Brands merged with Nabisco in 1981. Nabisco was integrated into Kraft Foods in 2000, and this week’s announcement makes it part of the Kraft Heinz Company, which also includes iconic brands such as Velveeta, Oscar Mayer and Kool-Aid, from the Kraft side, and Bagel Bites, Ore-Ida potatoes and, of course, Heinz ketchup from the Heinz side.

Kevin Hughes, Suffolk’s director of economic development, said he is not aware of any local impact forthcoming because of the merger, city spokeswoman Diana Klink said.

Scott Schmitz, president of Planters memorabilia club Peanut Pals, said he hopes the new company loves Planters history as much as he and other members of the club.

“Peanut Pals will continue to collect, promote and support all things Mr. Peanut and Planters,” Schmitz said. “We hope that Heinz also continues a similar relationship with Mr. Peanut. As we all know, Mr. Peanut is celebrating his 100th birthday in 2016, and we look forward to an appropriate celebration for someone who has achieved such a milestone age.”

Mr. Peanut was born in Suffolk in 1916 when Amedeo Obici, founder of Planters, held a contest to come up with a mascot for the company. Teenager Antonio Gentile, a resident of downtown neighborhood Hall Place, drew an anthropomorphized peanut with arms and legs, winning $5 for his trouble. A marketing company buffed Mr. Peanut’s image with a monocle, top hat and cane.

The new Kraft Heinz Company will be co-headquartered in Pittsburgh and the Chicago area. It will have revenues of about $28 billion, according to the press release.

Warren Buffett’s Berkshire Hathaway and Brazilian company 3G Capital will invest an additional $10 billion. Existing Heinz shareholders will collectively own 51 percent of the new company, with existing Kraft shareholders ending up with 49 percent.

Eight of the new company’s brands are worth more than $1 billion, with five between $500 million and $1 billion, according to the release.

The transaction is subject to approval by Kraft shareholders and regulatory agencies and is expected to close in the second half of 2015.

Officials have blamed the bad winter weather after the Port of Virginia lost $560,000 in February. They had budged for... read more