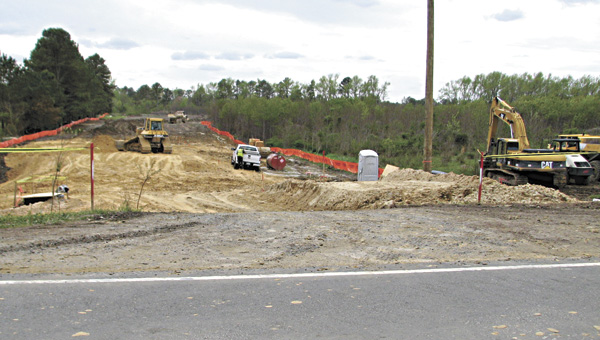 Construction crews have recently started work on the future site of the Foxfield Meadows development. Bill Darden of Hearndon construction said about 128 homes are planned, with a few more at the back of the neighboring Westhaven Lakes neighborhood.

Earth has been moved for a new housing development off Pitchkettle Road.

Construction equipment is on the site of the future Foxfield Meadows development, between the Westhaven Lakes community and the Route 58 bypass. It’s ultimately planned to include 128 homes as well as an additional 35 added onto the back of Westhaven Lakes.

“We just started work, so we’ve got a ways to go,” said Bill Darden, executive vice president of Hearndon Construction.

The first phase of building includes 78 home sites, with 50 coming later. Darden said he’s not sure of the timing for the 35 homes at the back of Westhaven Lakes.

“Those probably would be bigger and more expensive than the initial phases,” he said.

The two neighborhoods will connect with the existing Westhaven Lakes, which became a cause for consternation among homeowners there when the development was first proposed.

Westhaven Lakes homeowners also said they were concerned about additional traffic along Pitchkettle Road, especially through the Boston neighborhood, where there are only two lanes, no sidewalks and homes close to the road.

“The people that rallied against it will eventually rally for it,” Darden said. “We take pride in what we do. We met with some of the surrounding neighbors and talked about our plans.”

Foxfield Meadows will include a park, Darden added, but not amenities like a clubhouse or pool.

“Those things are nice, but they cost people money,” he said, noting there are plenty of other developments around that include them. “We felt it was best to not include those into this.”

“Somebody else at some point in the future may do that, but it will not be me,” he said.

Darden said he is excited about the new development.

“The market is improving, and we think the timing is right,” he said. “It certainly would be a good addition to the corridor out there, with easy access to the bypass.”

Council: ‘No more excuses’ on budget