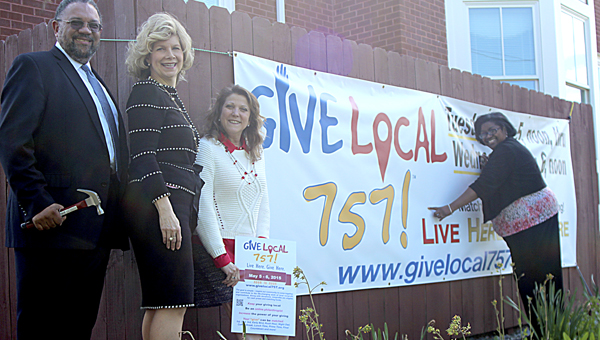 After helping Give Local 757 during its first year, 2014, by promoting it to the nonprofits it supports, this year the Suffolk-based foundation is giving $45,000 toward donor prizes.

Tammy Flynn, director of philanthropy with the Peninsula Community Foundation, which hosts the local campaign with its Suffolk and Southeastern Virginia counterparts, said The Obici Healthcare Foundation is the largest single contributor.

“They have given $45,000 for prizes and matching money throughout the day,” Flynn said.

During the 24 hours of giving, noon to noon May 5-6, for its grantees, The Obici Healthcare Foundation will fund grand prizes for the top 3 organizations with the most unique donations.

A unique donation is one donation to one organization by one donor.

Other examples from the long list of Obici donor prizes include five donors randomly selected to receive $1,000 for their chosen nonprofit, $500 for the first nonprofit to receive a donation, and the Night Owl Prize — $1,000 for the nonprofit that receives the highest number of unique donations between 10 and 11 p.m. on May 5.

“Part of our mission is to help nonprofits sustain programs after our funding has been used,” Pitrone said.

“An online-giving program will help nonprofits continue philanthropy for years to come. We are interested in seeing our online philanthropy grow, and we are encouraging our community to support this exciting day of giving by donating prizes to help make individual philanthropy more meaningful.”

Give Local 757 encourages folks to pledge online to their chosen charity or charities at www.givelocal757.org. The minimum donation is $10, Flynn said, adding the idea is to give everyone in the community an opportunity to practice philanthropy.

Of the 167 nonprofits involved, “maybe 20 or 30 provide service in the direct vicinity of Suffolk,” Flynn said.

Last year, the inaugural local event raised $190,000 for 106 nonprofits, while across the country, Americans gave $53 million to 7,000 nonprofits in over 100 communities for Give Local America, Flynn said.

The campaign builds nonprofits’ capacity to use marketing, social media and online fundraising, she said, adding, “Probably half of the nonprofits last year didn’t have Facebook pages.”

Folks can also give at any Langley Federal Credit Union, another prize sponsor along with Bank of America, O’Connell/Fendrick/Johnson Group, Spectrum and BayPort Credit Union.

Restaurant behind on meals tax