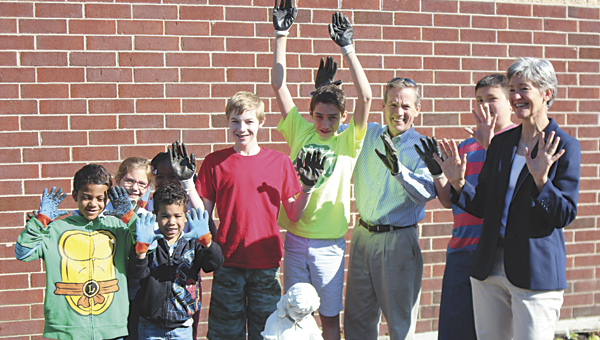 At Oakland Elementary School on Wednesday, Suffolk’s Delegate Chris Jones dug into what two nonprofits are doing to plant healthy ideas in the minds of children.

Jones visited a vegetable garden at the school in the community he was raised in. Representatives from Suffolk Partnership for a Healthy Community and the Virginia Foundation for Healthy Youth joined Oakland Elementary educator Anne McCoy to explain what it’s achieving.

“These are some of the things we have been able to do,” Brayboy said.

For Jones, the garden carefully laid out in the school’s courtyard was a different world than what he’s used to — the state legislature, where he chairs the House Appropriations Committee, and Bennett’s Creek Pharmacy, his business.

At one point, he asked his tour guides about the twine strung across one of the raised beds, which creates a neat grid.

“It’s the square-foot gardening method,” remarked Kay Cherry, chair of the partnership’s community and school garden network. “We can grow twice as much.”

McCoy, who teaches physical education, said she immediately began rallying support among teachers for the school garden when Cherry approached her with the idea.

After starting out last summer, the gardening team currently has 14 teachers. “It’s kind of become a growing thing,” McCoy deadpanned.

All Oakland students are involved, she said, from preschool through fifth grade.

According to Brayboy, the gardens and associated programs bring home to families the message that “not only can you raise crops, but this is how you prepare them.”

“The children are informing their parents when walking down the vegetable aisle,” she said. “It’s a win-win all around.”

“It’s a great partnership,” said Marty Kilgore, the foundation’s executive director. “We love the way communities come together to pick what activities they work on.”

Jones was enthusiastic about what he saw, even joining several students to pull on gardening gloves and plant some new varieties.

But he did lightheartedly express one reservation — that as a pharmacy owner, he might be out of business if the initiative works too well.

But that would be for the greater good, he ultimately concluded.

“What you eat and how you take care of yourself makes a huge difference at the end of the day,” Jones said.