As a member of the U.S. Marine Corps Reserve, Suffolk’s Matt Adams knows the importance of helping wounded warriors and veterans. 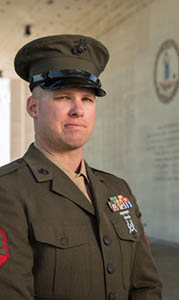 The groundman for Dominion Virginia Power, based at the Chuckatuck location, visits the VA hospital frequently, visiting patients who don’t have family nearby. He and his family put together Easter baskets for the veterans and went from room to room dropping them off. He’s working on getting together a fishing trip for the veterans.

He’s also visited Suffolk’s Oaklawn Cemetery alongside other Dominion volunteers to clean up the site and to place wreaths on veterans’ graves for the Christmas season.

His volunteerism hasn’t ended with veterans. While off-duty, he visited a local church with a Dominion bucket truck for “trucker appreciation day.” He showed children how the bucket truck operates and got the chance to talk to adults about what it’s like to restore power after natural disasters.

He has visited elementary schools to talk about power line safety and been to VFW Posts to honor veterans. He is involved in the Dominion Veterans Network, a group of military-affiliated Dominion employees.

All of this work and more is what got him nominated by his supervisor for one of Dominion’s Volunteers of the Year. He said he was “floored” to receive the award.

“When I was told by my manager that he had nominated me, I was taken aback,” he said. “I thought it was really cool just for him to recognize what I’ve been doing.”

Upon learning he had actually received the award, Adams said, “The first thing I told him was, ‘You’re kidding, right?’”

Adams said his volunteerism is but a small part of all Dominion employees’ service to their communities.

“We’ve logged over 100,000 hours in Virginia alone of volunteer service,” Adams said. “My stuff has just been a drop in the bucket.”

Adams does all this volunteerism in between working hours at his job as a groundman.

As if that weren’t enough, he has a wife and three children and is a full-time student at Tidewater Community College.

Adams has been in the Reserves for about nine years. He was inspired to enter the military through his mentor, an Army Ranger.

“It was rough, but we made it through,” he said.

Those deployments inspired him to volunteer, especially with wounded warriors.

“A lot of guys didn’t get to come back home or didn’t come home all in one piece,” he said. “It drove home that these guys need to be taken care of. I came back to give back.”

Thanks to his honor, Adams got the opportunity to direct a $1,000 grant to a charity of his choice. He chose LZ-Grace Warriors Retreat, a horse farm in Pungo that helps returning military members decompress for a week or two to get used to being back in America, Adams said.

Thanks to Adams’ volunteerism and that of all Dominion’s other Virginia employees, the volunteer program recently received a 2015 Governor’s Volunteerism and Community Service Award.