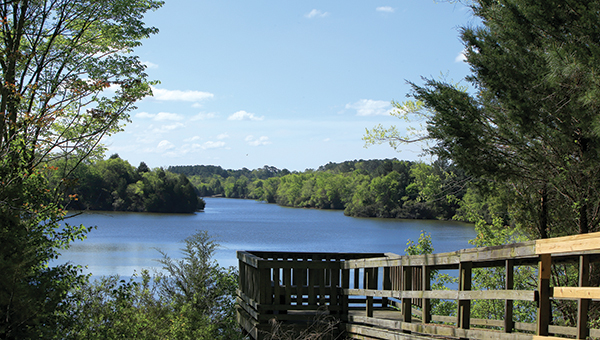 Bradford “Biff” and Susan Andrews, retired school teachers turned Virginia Master Naturalists, are two of the relatively few who are in on the secret of Lone Star Lakes Park.

Once a week or so, they arrive in their Honda Civic to explore the 11 lakes, Chuckatuck Creek, Cedar Creek and the surrounding landscape. 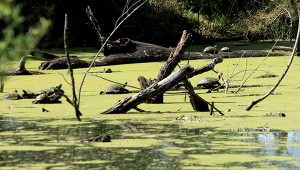 Turtles can be found in abundance at Lone Star Lakes, but sharp-eyed visitors might catch a glimpse of other wildlife, too, including visiting bald eagles.

Nature has reclaimed Lone Star after marl mining created its lakes, in turn after colonial expansion pushed the Nansemond Indians out of what was their homeland.

The miners came in the early 20th century, digging out the calcium carbonate (formed from the remains of marine animals) mixed with sand and clay. It made for superior cement, Biff Andrews notes.

“The main road was the old railroad track,” he says, referring the road passing beneath Kings Highway just past the Chuckatuck Volunteer Fire Department.

Miners crushed the marl on site, loaded it onto barges and floated it down the creek to the James River and on to Newport News.

The city purchased the property in the 1970s after the mining creased in the 1960s, according to Biff Andrews. Today it’s a haven and a playground for canoeists and kayakers, fishermen, horse folks, model airplane enthusiasts, archers and more.

Of course, there are also those who just get a big kick out of the wonders of nature — like Susan and Biff Andrews. 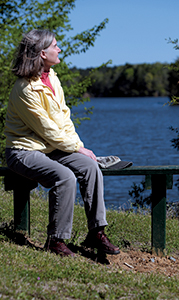 Susan Andrews and her husband “Biff” like to walk along the road and trails at Lone Star Lakes at least once a week. There are many places to sit down and enjoy the views, like this bench at Crane Lake.

“We simply look at what there is to see,” Biff Andrews says during a visit to the park one sunny April morning. “I bet you didn’t know we discovered a dead two-toed amphiuma salamander. It was two feet long.”

“We are in awe of it all,” Susan Andrews says. “I think that is the big part for me.”

Back to the geology lesson, recounted in the Chuckatuck Greater Historical Foundation’s 2011 book, “Chuckatuck: Crossroads in Time,” and also by Susan and Biff.

The asteroid struck near Cape Charles, the fracture extending as far west as Chuckatuck, where it coincided with the Suffolk Scarp.

Evidence — the marl perhaps chief among it — shows Lone Star was once well east of the Atlantic shoreline. But it’s now about 25 feet above sea level.

“Literally, you can draw a line on a map and say, ‘This is where Tidewater ends, and the coastal plain begins,’” he says. “And we are just lucky enough to live here.”

Now Biff Andrews is leaning down to point out a chunk of marl. “You can tell this was once the sea bottom,” he says.

Next, they point out a green heron. “They are the last of the herons to get here in the spring,” Biff Andrews says.

Pretty soon, they spot a blue heron on one of the lakes, and now they’re pointing out what look to be raccoon tracks in the mud.

Biff Andrews and J.R. Ruggiero, the park ranger for almost 15 years, who has also come to show off Lone Star’s charms, are puzzling over a tree. Ruggiero identifies it as a honeysuckle, but it looks different than honeysuckles Andrews has seen.

There’s always something to learn at the lakes.

Ruggiero says the lake water is “very, very clean.” The lakes have a combined surface area of about 500 acres, he says, and the total park stretches across 1,094 acres.

Ruggiero says, “It’s one of Suffolk’s best-kept secrets, because many people who have lived here many, many years don’t know Lone Star exists.”

The park sees 22,000 to 30,000 visitors annually, he says, and is open daily from sunrise until sunset, except in inclement weather.