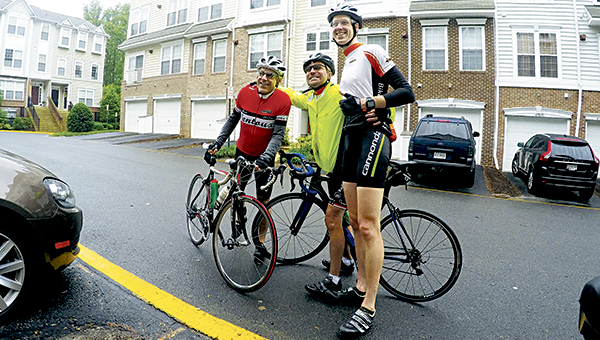 Corey Wittersheim and his godfather, Steve LeBeau, and his brother-in-law, Steve Kana, get ready to start out from Wittersheim’s house in Fairfax on June 5. Wittersheim rode to his parents’ house in Suffolk, arriving June 6.

Suffolk native rides from Fairfax to Suffolk for fundraiser

A Suffolk native upped the ante this year on his usual 100-mile bike ride to support the National Multiple Sclerosis Society.

Corey Wittersheim, whose mother has multiple sclerosis, has done the ride in three out of the last four years. But this year, his employer, tax and consulting service McGladrey, conducted a contest for which the prize was five days paid time off and $2,500 to dedicate to a project for a special cause. Wittersheim won.

“Raising money for the National MS Society means a lot to me, because my mom has multiple sclerosis,” Wittersheim said. “What I wanted to do was take the ride up a notch.”

Rather than the usual 100 miles, he decided to ride to his parents’ Suffolk home from his home in Fairfax, a journey of 255 miles.

“Probably the first 30 miles, getting out of Fairfax, was on major roads, but after that it was all back roads,” he said. “It’s a great way to see the state. I got to see a lot of beautiful countryside.”

On the first day, he rode about 134 miles from Fairfax to Ashland. His godfather and his brother-in-law rode with him for the first 80, and his wife and parents-in-law met him at designated spots to get him food and cold water.

“They acted as my support crew,” Wittersheim said. “They did that from Prince William County all the way to the Jamestown Ferry, then my dad took over for the last 50 miles.”

Wittersheim actually wound up riding about 263 miles thanks to a detour in Spotsylvania County due to a bridge out, and a missed turn in Isle of Wight County.

“I’m just blown away and completely thankful for everybody’s generosity,” Wittersheim said. “It means the world to me we were able to do so much and raise so much money that’s going to help in the fight against MS.”

As Wittersheim approached his parents’ Suffolk home last Saturday afternoon, a cheering crowd of 40 or 50 people holding signs and taking photos greeted him.

“It really hit me when I was at the apex of the Mills Godwin Bridge,” he said. “That’s really where it set in that I had done it. I had a lot of adrenaline going from there. Even though I had ridden 255 miles to that point, I didn’t drop under 20 miles an hour from there all the way to the house.

“I was coming down the road and I could see everybody starting to move their way to the road,” he said. “It was a fantastic feeling to know I had accomplished my goal and finished the ride.”

Fundraising is still open for the continued effort. Anyone hoping to donate can visit main.nationalmssociety.org/goto/Corey255.

The biggest priorities for Suffolk’s Parks and Recreation Department should be walking and biking trails and an indoor swimming facility,... read more