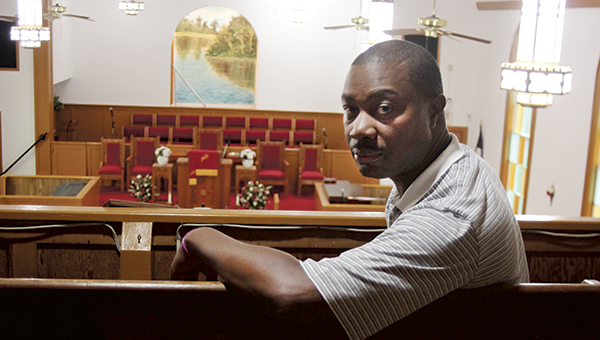 Fritz Whitfield, who chairs a committee organizing an anniversary celebration for Little Bethel Baptist, sits inside the historic Chuckatuck church on one of the original pews. The community is invited to come and celebrate Little Bethel Baptist’s tenacity on Sunday afternoon.

A historically black church in Chuckatuck invites folks to come and help celebrate its 149th anniversary this Sunday.

Little Bethel Baptist is one of only a very few local churches whose original deed — in this case, dating from 1886 — can be viewed at the courthouse, according to Fritz Whitfield.

“When you walk through those doors, you get an opportunity to really understand and respect the vision of a group of people who came out of slavery,” the anniversary chairman said.

“It took a lot of determination to see a milestone of this magnitude.”

The land for the church at 6533 Everets Road was either donated of sold — Whitfield said the church can’t tell which, but it plans to find someone to decipher the deed to find out — by the Beale family.

The original pews can still be found up on the inside balcony, and the church also still has the original pulpit and pastor’s desk, which Whitfield said they’re looking to have restored for the 150th anniversary next year.

The pressed-metal ceiling is original. Its Carpenter’s Block design is thought to symbolize one of the quilt codes used by the Underground Railroad to help escaped slaves.

“It means ‘Help from Jesus would guide them,’” Whitfield said.

Whitfield, on his mother’s side a fifth-generation Little Bethel member, and on his father’s a fourth-generation member, says church leaders are working to collect the early history for 2016’s sesquicentennial.

Among what they already know, the church during about its first two years was set much further back from Everets Road, and it had an outdoor baptismal pool.

They don’t yet know what prompted the relocation to the current site, just across the road from a cotton field.

“It speaks to us in different ways,” Whitfield said of the church’s long history. “It lets us know persistence and self-determination is the foundation we still stand upon.”

He plans to talk about the theme for the anniversary, Whitfield said, which is “grace through every generation: remembering, rejoicing and rededicating.”

Old photos, Bibles and some other church artifacts will be out for folks to peruse. Whitfield said visitors could expect to feel loved when they walk through the doors.

“It’s definitely open to the public — anybody who wants to come,” he said.