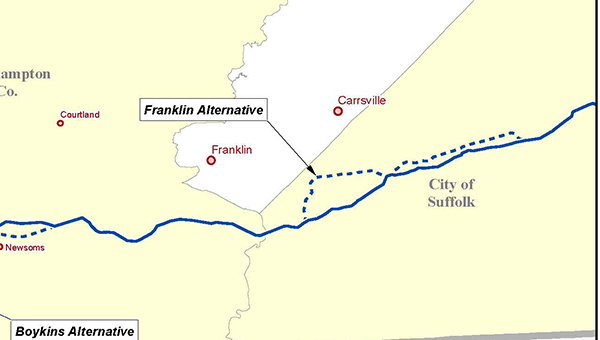 The above map shows a proposed alternative to part of the proposed route of the Atlantic Coast Pipeline. A public meeting about it is set for Wednesday in Emporia.

An alternative route through Suffolk for the Atlantic Coast Pipeline will be discussed at a public open house Wednesday in Emporia.

Set for 5 to 7:30 p.m. in the Golden Leaf Commons, 1300 Greensville County Circle, the meeting also will include discussion of alternatives in Brunswick and Southampton counties.

The alternative route through Suffolk, known as the “Franklin Alternative,” would be slightly longer than the original 18-mile length, but about seven miles of the alternative would be adjacent to existing utility rights of way, according to a press release from Dominion Energy, which is one of the partners on the project.

The alternatives will be evaluated based on technical feasibility, constructability, environmental impact, landowner considerations and existing infrastructure, according to the release. The Federal Energy Regulatory Commission requires interstate natural gas pipeline companies to consider existing rights of way when determining routes for projects.

The 540-mile natural gas pipeline by Atlantic Coast Pipeline would run from Harrison County, W.Va., to Robeson County, N.C., with a spur coming east from the Virginia/North Carolina state line to Chesapeake, running through Suffolk on the way. It is estimated to cost about $4.5 billion.

Its route has been the subject of at least one lawsuit in Suffolk so far. Davis Boulevard LLC has denied the company permission for surveyors to examine its five-acre parcel east of Blythewood Lane to determine its suitability for the route. This alternative proposal does not affect that part of the route.

More information and route maps are available at www.dom.com/acpipeline.

By Azana Carr Correspondent A variety of sites in Suffolk are holding summer feeding programs to help children in need... read more