‘I’m not going to be angry’ 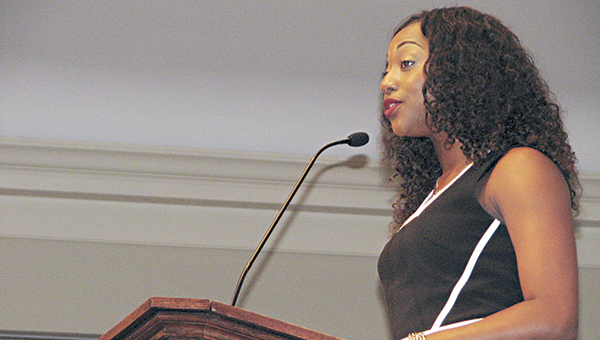 Alana Simmons, the granddaughter of the Rev. Daniel Simmons, speaks to a Suffolk prayer vigil on Tuesday night at Westminster Reformed Presbyterian Church. Simmons was one of the victims of a deadly shooting June 17 at his church, Emanuel African Methodist Episcopal Church in Charleston, S.C.

The granddaughter of the late Rev. Daniel Simmons was the guest of honor at a prayer vigil held Tuesday night at Westminster Reformed Presbyterian Church.

Simmons was one of the nine victims of a racially motivated shooting last month at Emanuel African Methodist Episcopal Church in Charleston, S.C. Suffolk residents black and white came together on Tuesday to pray for the nation, for the victims and for Suffolk.

Alana Simmons, who lives in Newport News, repeated on Tuesday what members of her family and the families of the other victims told the shooter at his bond hearing last month, offering forgiveness and grace for the shooter.

“The first words she uttered were, ‘I forgive you,’” Simmons said of the first speaker at the bond hearing. “That was humbling, to say the least. It just showed me how much stronger God’s love is than anybody’s hate.”

Simmons said her grandfather and his fellow parishioners, who had gathered for a Bible study on June 17 when they were gunned down, would not have wanted their legacy to be one of hate. She said she’s been asked many times how she can possibly forgive.

“It’s not about me,” she said. “It’s about what they would have wanted their legacy to be. I’m not going to be angry, and I don’t want anybody else to be angry.”

Simmons also noted that calls for gun control, the removal of the Confederate flag from the public sphere and other legislation won’t solve the problems of violence or racism.

She announced a campaign called the Hate Won’t Win Challenge. Folks are encouraged to do an act of love toward someone different from them and post a photo of it on social media. It can be found on Facebook, Twitter and Instagram.

“Love unexpressed is meaningless,” she said.

The service included prayers and remarks from local pastors of all races, as well as rousing renditions of “Great is Thy Faithfulness,” “Amazing Grace” and “It is Well with My Soul.”

Twice during the service, the more than 200 in attendance were asked to join hands during prayer and song. Hands of all shades grasped one another across the aisles.

“What he meant for evil turned into something that has brought us all together,” state Sen. Louise Lucas said during her remarks on Tuesday. “There is nothing that brings my heart more joy than to see this kind of unity.”

Speaking during the service, the Rev. Skip Irby recounted the story of Joseph and his brothers from the book of Genesis.

“Even though you intended to do harm to me, God intended it for good,” Irby said.

“The devil is on the run,” said Pastor Ben Fitzgerald of Tabernacle Christian Church.

The service was organized by a multi-racial coalition of local pastors, including Bishop Carlton Upton of Tabernacle Christian Church and Irby, who retired from West End Baptist Church.