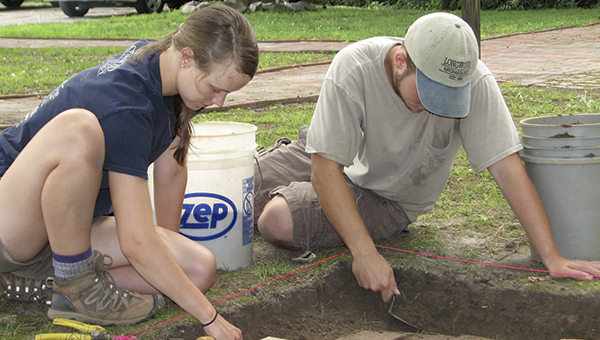 Jessica Clark, a Longwood University alumna, and Tyler Rocke, a rising junior at Longwood, work on excavating the ground near a cistern at Riddick’s Folly on Thursday. They were helping a state archaeologist work at the site.

A bit of 19th-century history was being unearthed at Riddick’s Folly on Thursday.

Michael Clem, an archaeologist with the Virginia Department of Historic Resources, was on site with two young volunteers to help examine an underground water cistern near the historic home on North Main Street.

A Folly volunteer, Dempse Burgess, began uncovering the cistern in 2012. It took him about a year to remove the thin layer of grass and dirt that covered the structure, which is roughly 8 feet by 22 feet and may be even wider underground, Clem said.

Burgess and Folly director Lee King then walled off the cistern to prevent dirt from re-covering it.

King believes the cistern collected rainwater from the roof of the home and fed into the laundry room, which is in the basement of the home.

“I really think they had running water into the laundry,” King said. A hole in the top of the cistern lines up with the drainpipe coming off of the roof.

It was fairly advanced engineering for 1837, when the home was built, King said. The Prentis House, another historic home in downtown, also has one, he said.

“I think they might have been more common than we realize,” he said. “We just don’t know they’re there.”

The brick cistern has thick walls and a vaulted top. On Thursday, Clem and his helpers were focusing on the ground around the cistern, hoping to learn if it holds any more hidden treasures.

King said the goal is to make the cistern part of the interpretive tour of the home. Local businessman Hubert Young already has donated fencing for the project, King said. Thursday’s work will help them know exactly how big the cistern is and how much work is left before they get to that stage.

Downtown resident Darrell Cook, who is an architectural historian for the U.S. Navy — this project is unrelated to his Navy work — and is on the board of Preservation of Historic Suffolk, connected King and Clem.

“This bluff is such an important point here in Suffolk,” he said.

Helping Clem on Thursday were Longwood University student Tyler Rocke, a rising junior from Virginia Beach, and recent Longwood alumna Jessica Clark, from Stewart. Both are members of the Dr. James W. Jordan Archaeology Field School at Longwood, named after the popular professor who started the field school. It is now led by Dr. Brian Bates.

“They’re here to help and maybe teach me a thing or two,” Clem said.