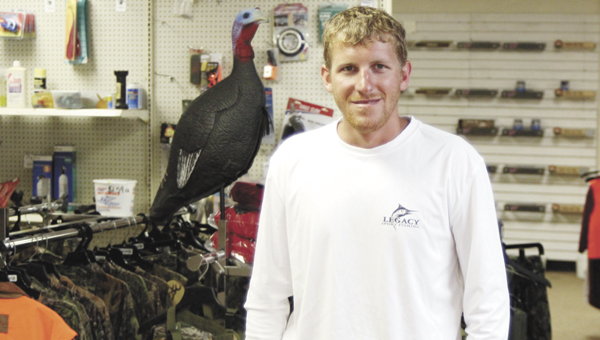 Dashiell’s manager Lee Dixon shows off some of the merchandise in the store last week. The store will close next month after selling off its remaining merchandise.

A longtime business in the city is calling it quits next month.

Dashiell’s Showroom, which supplies hunters and fishers everything they need for their hobbies, will close Aug. 9 after a three-day closeout sale that starts Aug. 7.

“Dad’s ready to retire, and Lee wants some different opportunities,” said Jenny Railey of her father, Drew Dixon, and brother, Lee Dixon. “It will be a good thing, ultimately.”

The family purchased the store in 2003, Railey said. But she added business has dropped off over the years thanks to the economy and the availability of goods.

“So many things are available to you online,” she said. “There are so many large superstores that are very difficult to compete with in a very niche market.”

The economic slump also had an effect on the business, she added.

Thomas Ashby Dashiell Jr. started the business, said his daughter, Fran Slough. He started it in 1955 and ran it for 35 years.

“He loved it, and they loved him,” Slough said of her father and his customers. “He was a fixture in there. He knew so much about fishing. People really loved him.”

Slough said it was a “wonderful store” and that her father, who died in 2008, was proud of it.

“He built it from the ground up, and he worked hard with it.”

The business was located on Holland Road for many years before that location closed. Slough said the family still owns it and leases it to another business. The current location is on Carolina Road.

“I’m sure it’s been a hard business to keep going,” she said.

Railey said the family is grateful to its customers.

“We want to thank those who have been loyal customers and friends over the years,” she said.

The closeout sale will offer the chance for hunters and fishers to pick up rods, lures, ammunition, apparel and other gear at nice discounts.

“There’s a little bit of everything,” Railey said. “We’re hoping that will be one last hurrah.”

The SYAA Bronco All-Stars commemorate their latest championship which came on July 25 in the 2015 PONY East Zone South... read more