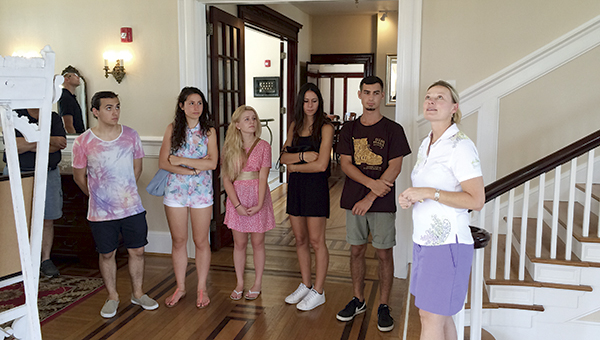 Four Italian teens on Wednesday took a tour of Suffolk’s famed Obici House as a part of a Suffolk Sister Cities-hosted student exchange.

Omar Ghirardo, Luca Zulianello, Serena Cadamuro and Andrea Brugnera all hail from around Oderzo, the city where Amedeo Obici, the founder of the Planters Nut and Chocolate Company and the former owner of the house, was born.

Terry Ann Tagg, director of operations for the Obici House, gave the tour. She walked the guests through each room in the house and told about the house’s construction and the people that lived in it.

The house was modeled after a villa in Obici’s native Italy and has many features made from materials brought in from Oderzo, Tagg said.

Tagg regaled them with stories of possible ghosts in the house, talking about her experiences with doors creepily opening and slamming shut, as the Italians listened with wide eyes.

Each of the teenagers that came to Suffolk from Italy remarked about how different life in Suffolk is, emphasizing differences ranging from the culture to the architecture.

“The whole experience for me is the most different,” Zulianello said. “It’s so different from Italy.”

Ghirardo said that another big difference is the openness of the people in America. “The people are a lot more confident,” Ghirardo said. “They will always start a conversation with you.” Ghirardo added that Suffolk is much more spread out, because in Italy one can bike or walk from place to place, but one has to drive in Suffolk.

Brugnera agreed. “Everything is so much bigger,” she said. “Even the paper towels are so large.”

After arriving in Suffolk on July 24, Suffolk Sister Cities has made sure that its guests get to experience quintessential American sites, pastimes and foods. The four have played golf, gone bowling, kayaked, seen the sights of Suffolk, and eaten plenty of American food in the time they have been here.

Brugnera and Cadamuro agreed that s’mores were the best American treat they had, also praising hamburgers and fried chicken. By the time they leave on Aug. 10, the Italians will have visited Washington, D.C., Busch Gardens, and a baseball game.

Overall, the four said, they enjoyed the tour and have liked Suffolk so far. The Obici House, Zulianello said, reminded him of villas in his hometown, and it showed the connection between Oderzo and Suffolk.

“It is so, so different here,” Ghirardi said. “But we like it in Suffolk.”

The teens were accompanied on their tour by Theresa Sims, the vice president of Suffolk Sister Cities; Joe Questore, the treasurer; and Ashton Headrick, Brugnera’s host.

The airlines are hopping between Suffolk and Oderzo this summer — two Suffolk teens are currently visiting Italy, and a delegation of 26 adults from Oderzo will visit here in August.

11 give input on leadership