Jo Dee Messina has just the album for anyone who’s never heard her music, but is willing to try. 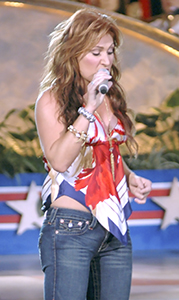 Jo Dee Messina will be singing at the Franklin-Southampton County Fair on Friday at 9 p.m. (Krista Lee Photography)

That collection features 15 tracks already familiar to her fans, including “Bring On the Rain,” “Wishing Well,” “Because You Love Me” and her debut hit single from 1996, “Heads Carolina, Tails California.”

She’ll appear Friday at the Franklin-Southampton County Fair with her full band.

Since the beginning, Messina has achieved nine No. 1 singles and 16 Top-40 singles and has sold more than 5 million records around the world.

Three of the nine albums include the “Unmistakable Trilogy,” which includes the EPs “Inspiration,” “Drive” and “Love.” Messina said during a recent phone interview that she had plenty of songs available at the time.

“I had been recording songs for years. They [the executives at her former label] were looking for that one song, that one hit,” she said. “I had albums and albums worth of material, and they have to release something. I just handed it in, and the label divided it up.”

There were several people producing, many of whom she had admired through the years.

“They were all great producers and just a joy to work to with them,” Messina added.

Appropriately, the songs on each album fit the title.

For Inspiration: “Heaven Was Needing a Hero,” “Keep the Faith” and a live acoustic version of “Even God Must Get the Blues.”

Love: “Always Have, Always Will,” “Treat Me Like a Woman Today” and a live acoustic version of “Because You Love Me.”

Following the completion of her contract three years ago, Messina struck out on her own, established her own label and released “Me,” in spring of last year.

“That album I began to post on my social media,” she said. “People would ask ‘When’s your new album?’”

But even though she’s independent and had founded Dreambound Records, it was up to her to finance a new collection. Kickstarter was suggested and, as Messina put it: “The fans showed up. They made it happen. This is their record.”

By the way, if you go to Nashville looking for the physical location of label, you’ll be searching in vain. There’s no building.

“It exists on paper so songs can be put in stores,” she said. “I don’t want that job of record mogul. There’s so much pressure. It’s just not a music gig. I like the creative side.”

Messina recently co-authored “Chicken Soup for the Soul: Thanks to My Mom” with Amy Newmark. This is described as “a collection of 101 stories of love, learning and gratitude.”

Messina takes the Main Stage on Friday at 9 p.m. Opening for her at 7 p.m. will be the Jody Pyles Band.