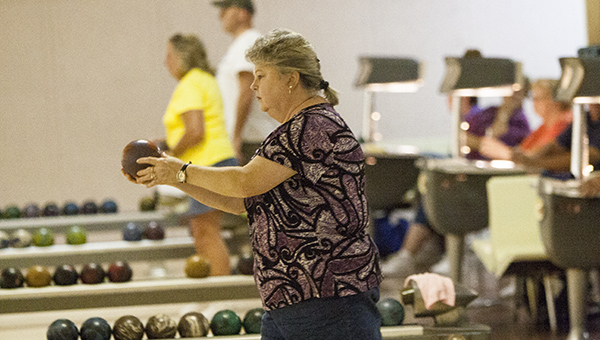 Brenda Gregory, the president of the Suffolk Tuesday Night Mixed Bowling League, plots a trajectory before bowling. She and the rest of the league are looking for interested bowlers to join in the fun and fellowship of Tuesday nights at Victory Lanes Bowling Center in Portsmouth.

Duckpins continue to fall regularly on Tuesday nights at Victory Lanes Bowling Center in Portsmouth as the Suffolk Tuesday Night Mixed Bowling League has gotten another season under way, but also continuing to fall is the league’s number of participants.

It hopes to reverse this trend this year and attract some new bowlers.

Carolyn Ricks, current secretary of the league, noted it used to have separate male and female divisions back in the 1980s, with eight men’s teams and eight women’s teams, all of them larger than today’s three-member squads.

She said the 1990s is when the men began to drop out, and then the women started mixing things up.

“At one point we had 14 teams,” Ricks said of the Suffolk mixed league.

Later, the number dropped to 10, and for the last few years, it has been nine, in terms of teams populated by players, with a 10th “blind” team producing set scores that helped the league maintain an even number of squads.

Last year, the league shrank to eight teams of players when a squad left in the midst of the season for reasons that were unclear, Ricks said.

This season, there are eight teams, but one of them consists of only two players, and one of those two is only staying on until a replacement can be found.

Ricks sees financial concerns as a big reason for the decline in bowlers in recent years, noting a period hit where gas prices were high and people were not getting raises.

“A lot of people just couldn’t afford to go out and do a lot of extracurricular activities, and I think that’s probably a lot of it,” she said.

Membership in the league includes a weekly cost of $16 for 36 weeks and a single annual fee of $15 for a sanction card that enables its holder to compete in duckpin tournaments anywhere.

“The bowling alley’s trying to do different fundraisers to help finance the bowling alley to keep (prices) from going up,” Ricks said, but this is difficult if the participation in such events is low.

The league’s cost to participate has not increased yet this season, but Ricks said it might go up to $17 weekly in January.

She acknowledged that some people do not like duckpin bowling because it is harder than 10-pin bowling, but she and the rest of the league hope some will join them at 7 p.m. on Tuesdays and discover that it can be fun and that good fellowship serves as the primary draw.

“That’s what we go down there for,” Ricks said. “It’s not to win money at the end of the year. It’s just to have fun and fellowship, and you meet people you don’t know and you get to visit with them every week.”