NRHS runs through to regionals

The Nansemond River High School cross country teams on both the girls’ and the boys’ sides advanced to today’s Region 5A South championships after their performances in the Conference 10 championships on Thursday in Chesapeake. 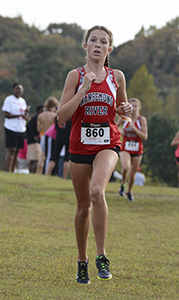 “I think we did pretty well,” Nansemond River coach Jason Reed said. “The teams as a whole stuck together.”

The placements of Lady Warriors in the results of the girls’ 5,000-meter run gave a fairly good snapshot of who has helped lead the team this year.

Junior Casey Williams placed the highest among her teammates, taking ninth overall out of 38 runners with a time of 21:58.92. Right behind her in 10th was teammate Christina Banks, also a junior, who had a time of 22:01.29.

For this season on NR’s girls’ team, “we were led by two juniors,” Reed said, referring to Williams and Banks. “We had two really good sophomores,” as well as an up-and-coming freshman.

The sophomores are Haley Neal and Skylar Old, and the freshman is Becca Leman.

Nansemond River’s boys’ team found itself in a less-than-ideal situation on Thursday as its No. 1 runner, senior Nick Gill, had been experiencing chest pains since the previous week and was instructed not to compete after a doctor’s visit.

Additionally, Reed said that senior Kevin Tohak, another leader for the Warriors, did not finish the boys’ 5,000-meter run due to a leg issue.

But all was not lost for Nansemond River.

“We had a couple surprising finishes by some of the members of the team that haven’t really been carrying the team,” Reed said, highlighting sophomore Dylan Heyman in particular. 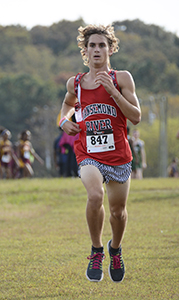 With a time of 18:07.79, Heyman ended up finishing seventh out of 44 runners in only his second race of the season.

He has practiced with the team all year but had an ankle issue early on and did not get his first race in until the final regular season meet.

During the course of this season, other Warrior up-and-comers have included junior Trae Eggleston and junior Brian Holland.

Most of Nansemond River’s regular season meets were against Southeastern District schools, and NR usually placed third or fourth in that field of 10, Reed said.

Reed, who took over coaching duties from Kurt Straub, has been pleased with the season Nansemond River has had.

“It’s been pretty good,” he said. “A lot of people have made a lot of progress throughout the year. We’ve had some tough competition, but we’ve basically progressed about the same as everybody else, I think.”

The Region 5A South cross country championships will take place on Wednesday at Bells Mill Park in Chesapeake.