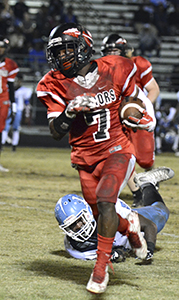 Second-year Warriors coach David Coccoli was excited by what his team achieved, improving on their 5-5 record from last year with a 7-3 mark this season.

“It means we’re taking a step,” he said. “It’s building a program.”

King’s Fork High School had claimed that title the previous two years and Lakeland the year before that.

Coccoli said he was pleased his seniors will be able to cherish these major accomplishments, “stuff they worked hard for, and they deserve it.”

Warriors senior quarterback Kiere Landry had a strong showing on Friday, going 11-for-13 passing for 149 yards and three touchdowns.

Among those catching touchdowns for Nansemond River were senior wide receivers Josh Covington and Chris Henderson.

Covington finished with four catches for 50 yards and a score.

Senior running back Terrence Lambert had a lighter evening than many this year, carrying the ball 11 times for 50 yards and a touchdown.

Despite the positives on the night, Coccoli saw sloppiness in his team’s play that he expects them to correct before next week’s home playoff game.

Saints wrap up No. 2 seed