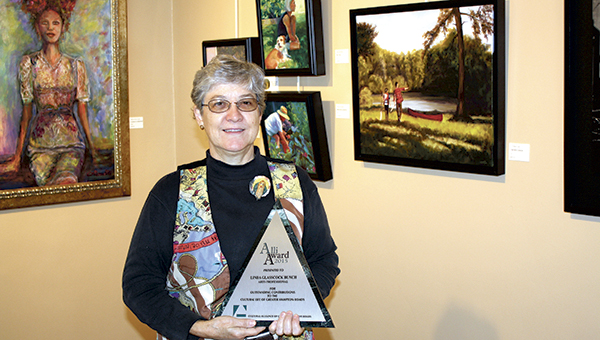 Linda Bunch, executive director of the Suffolk Art League, shows off her Alli, the award she won from the Cultural Alliance of Greater Hampton Roads for her contributions to the arts in Suffolk and throughout Hampton Roads.

She recruited an Eagle Scout and elementary school children to build and paint the seven colorful free Little Free Library boxes that sprouted up around the city earlier this year.

These book boxes were part of the inaugural 7 Cities, 1 Book’s series of events based on Ray Bradbury’s novel, “Fahrenheit 451,” at libraries and arts venues across Hampton Roads in April and May.

“I love that she is out making things happen … at classes, in the libraries, in our schools,” said Dana Adams, a member of the Suffolk Art League. “She has always been very inclusive about who we include in art league activities. She tries to make sure we get many people, from many different kinds of backgrounds, involved.”

Those are just some of the reasons Bunch, executive director for the Suffolk Art League for the past 28 years, recently won an Alli Award. The Cultural Alliance of Greater Hampton Roads gives the Alli tributes annually to individuals, organizations and businesses that have made contributions to the arts in Hampton Roads.

Bunch also serves as vice president of the board of directors of the Cultural Alliance of Greater Hampton Roads. She was nominated for the award by the Suffolk Art League’s Board of Directors.

“I was honored to even have been nominated by my board,” said Bunch, a clay artist.

One of Bunch’s top goals for the next year is to expand the Suffolk Art League’s reach into northern Suffolk, an area that has grown rapidly during the past decade. Historically, most of the art league’s programs and classes have taken place in downtown Suffolk.

But during the next year, largely thanks to a grant from Target, the art league is taking art to the people in northern parts of the city.

“We have large population of new people in town who have to travel greater distances for workshops,” Bunch said. “If our mission is to serve all of Suffolk, we can serve them better in their own communities.”

Last summer, the art league sponsored a summer art camp for students in northern Suffolk, Bunch said. Next year, the art league will increase its offerings of workshops and programs at the North Suffolk Library.

Hampton Roads’ celebration of “Fahrenheit 451” started out as Bunch’s grant application for the National Endowment of the Arts’ program, The Big Read. The program offers grants to communities that build myriad programs — forums, book groups, poetry readings and the like — that revolve around a single book.

When Suffolk didn’t win the grant, the group — 7 Cities, 1 Book — still moved forward with the events in Hampton Roads. There were book club discussions in Chesapeake, Norfolk and Virginia Beach. The Suffolk Art League kicked things off with a juried exhibition and reception at the Suffolk Art Gallery. Local artists conducted make-and-take craft workshops that connected to Fahrenheit 451.

7 Cities, 1 Book is making plans for a similar program next year, using a book written by a Hampton Roads author, Bunch said. She declined to name the author until the deal is finalized. But the program was so popular that it has outgrown seven cities; York and Gloucester counties have signed on to participate next year, and Williamsburg is considering it.

The adult book will come with a companion book for children, she said.

The art world learned the benefits of regionalism long ago, Bunch said.

“We understand that joint efforts are more effective with limited resources,” Bunch said. “We (the art community) try to speak with one voice. We get more done by pooling resources than through a lot of small efforts.”

Bunch is also in the process of organizing “Handle With Care,” the art league’s juried exhibition expressing the balance between man and nature, for April 2016. She and the SAL’s board of directors are hopeful the regional exposure through Fahrenheit 451 will ultimately bring more artists to other juried exhibitions in Suffolk.

Although administrative work and other people’s art fill her time, Bunch makes sure she has at least a couple of days of studio time weekly to pursue her love of working with clay. She exhibits and sells at two shows a year — Williamsburg in spring, Waynesboro in the fall — and has works for sale at the Suffolk Center for Cultural Arts, Riddick’s Folly and Plum Crazy.