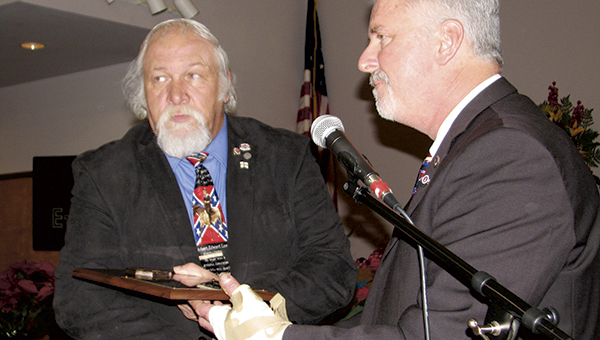 For once, B. Frank Earnest Sr. wasn’t the one doing most of the talking on Thursday evening.

In fact, many of his friends and comrades in the Sons of Confederate Veterans were the ones talking about him.

Earnest was honored with the Marion Joyner Watson Award, given annually by the Tom Smith Camp No. 1702 of the Sons of Confederate Veterans. Named for its first recipient, who was a tireless researcher and protector of the history of Suffolk and Nansemond County, the award is given to those who work to preserve Confederate history.

“When you’re in the Sons of Confederate Veterans, you’re not limited to one camp,” he said. “You can visit other camps, work with other camps.”

Earnest has been a member of the organization for 25 years. His maternal grandmother, who helped raise him, was born in Dinwiddie County in 1884 and regaled her grandson with their family history.

“She told me the stories of her family in the war,” he said, recalling a toy Confederate soldier set he received as a child. “I have never not been interested in that period of history.”

But for many years, he thought he was the only one.

“I thought I was the last dinosaur or something,” he said. “I thought, ‘No one cares about this anymore but me.’”

But when he learned about the Sons of Confederate Veterans, he joined immediately.

Since then, Earnest has done a lot of work to help preserve the heritage of his ancestors and other Confederate veterans. He helps restore gravestones and travels throughout the South defending the Confederate heritage.

He also is a living history portrayer and is a frequent guest at the Suffolk Seaboard Station Railroad Museum, where he portrays Confederate cavalry officer Gen. Laurence Baker, a North Carolina native who was a commander at Gettysburg and was wounded at Brandy Station in 1863. After the war, he was an agent for the Seaboard & Roanoke Railroad, which operated from the station.

Earnest also is a past Virginia Division Commander, past Chief of Heritage Defense and was commander of the Army of Northern Virginia from 2010-2012.

He said the Sons of Confederate Veterans exists to honor ancestors.

“This is the story of family,” he said. “I’m surprised by the people who have ancestors that aren’t passionate about it.”

During Thursday’s ceremony at Bethlehem Christian Church, no fewer than half a dozen people stepped forward to talk about how Earnest has inspired them.

“Frank is the type of guy who’s always doing something for the South,” Mike Pullen said.

“Frank’s knowledge of Confederate history never ceases to amaze me,” said Bob Shirley, commander of the Norfolk County Grays. “We’ve often said we spend so much time in cemeteries that people are going to think we’re weird.”

Past honoree Katheryne Boone Hamilton, the descendant of a free black man who served for the Confederacy during the Civil War, recounted calling Earnest to her home late one night when she had just endured outpatient surgery and the power went out.

“He flipped that one (breaker), and we had light,” she said. “That was a comfort to me.”

Earnest said it was quite an experience to hear so many people saying good things about him.

“Not a one of those people hasn’t inspired me,” he said.

Another opportunity for the public to comment on the proposed plan for U.S. Route 460 is ongoing until Jan. 5.... read more