Chesapeake police are seeking a man they believe to be involved in three robberies in the Western Branch area on Christmas Day. 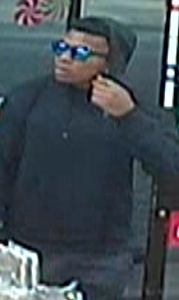 Police in Chesapeake are seeking this man they say committed three robberies on Christmas Day.

The first one occurred at 12:30 a.m. in the 3400 block of Western Branch Boulevard, according to a Chesapeake press release. The suspect entered the business, purchased an item and then demanded money when the cash drawer opened.

The second robbery occurred at 12:15 p.m. in the 3200 block of Western Branch Boulevard. The suspect said to the clerk, “Give me the money.”

In the third robbery, at about 6 p.m., the suspect once again demanded all of the money. He left the business on foot heading towards Churchland Boulevard. Officers searched the area but did not find the suspect, according to the release.

The suspect was described as a light-skinned black male, about 6 feet tall, wearing a black hoodie and blue tinted sunglasses.

Anyone who has information is asked to call Crime Line at 1-888-LOCK-U-UP or text the keyword CHESTIP and the tip to 274637 (CRIMES). Tipsters never have to give their names or appear in court and may be eligible for a reward of up to $1,000.

Men rescued from Back Bay