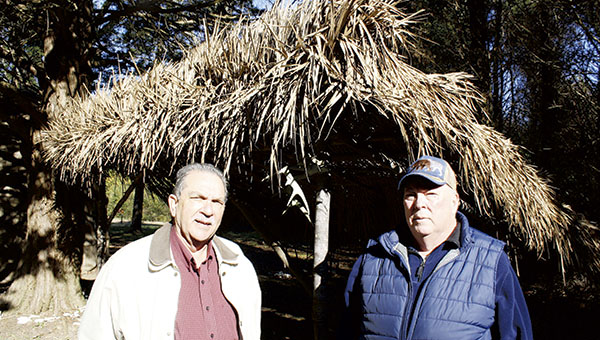 Five longhouses — single-room, beehive-shaped structures, in various stages of completion — are clustered in a grove of cedar trees outside Chuckatuck, near Long Star Lakes Park.

Two wooden lean-to shelters, a fire pit surrounded by oyster shells and a tanning rack for drying and stretching animal hides — all typical of what would have been in the tribe’s original village in the mid-1600s — are located nearby.

The shelters are the first part of the tribe’s proposed Mattanock Town, a $5 million replica of a 17th-century tribal village near the tribe’s ancestral lands. The project calls for a chief’s longhouse, a tribal museum, a log school, reburial and powwow grounds, a cultural park, walking trails and seasonal gardens.

After years of discussions, the city and the Nansemond Indian Tribal Association inked an agreement in January 2013 that transferred 70 acres of city-owned, waterfront property to the tribal association to build the Indian cultural and educational center.

The agreement stipulates that the property will revert back to the city if Mattanock Town is not finished within five years, by Jan. 31, 2018.

“It’s like a weight hanging over our heads,” said Nansemond Chief Earl Bass. Even though the deadline is a couple of years off, he says he expects the tribe will have to request an extension from the Suffolk City Council.

Bass said the process of getting Mattanock Town going has been slow, mostly because of funding issues.

The tribe lost the services of an architect who had been working pro bono designing the village, due to a job change, Bass said. Although abundant prior to the state’s Jamestown 2007 initiative, grant sources have shrunk significantly, he said.

The Nansemond tribe and volunteers built two longhouses before the powwow last August, said Bass. Hunter Ward, a member of Driver’s Boy Scout Troop 16, is building the other structures for his Eagle Scout service activity.

Ward organized a team of fellow Boy Scouts, their fathers and tribal volunteers, who spent two Saturdays in October building the longhouses, Bass said. The group spent one morning in an Ivor forest tract, cutting down and hauling 260 donated sweet gum saplings to the Nansemond’s Mattanock Town site.

Gum saplings are preferred, because they are so pliable, Bass said.

Then, the boys debarked the trees, which helps keep them insect free, and shaped the green timber into the dome-shaped frames of longhouses, Ward said. They used twine to lash the saplings wherever they crossed, forming the houses’ framework. Sheets of woven reeds made in the Philippines will be put over the walls in February or March, completing the project.

Ward, who said he is halfway toward his $2,600 fundraising goal to buy the woven reed mats, said he selected his project, because he wanted to help the tribe retain the land.

The Nansemonds have allowed the Boy Scouts to camp and hold special events at the site.

Bass would like to see more partnerships with scouts, organizations and individuals who want to help. He said he wanted to dispel any myth that people have to be tribal members to offer input or participate.

“We have a diverse group of people who donate their time and efforts to help us,” Bass said. “We need all volunteers. We want to share this with the community, and we welcome anyone to come and be part of this.”

During the winter, Bass said, the tribe will search for an architect and have soil samples tested. The woods and land have a lot of leftovers from the former Lone Star Cement Co., which once operated on the site, including buried rail lines, remnants of a metal building and sealed tunnels.

“You can’t go 10 feet in any direction without stuff protruding out of the ground,” Bass said. “We want to determine exactly what’s in the soil before we start digging and hit something Lone Star had buried.”

While Mattanock Town has not come to fruition exactly as proposed, Mayor Linda Johnson said she believes the tribe has succeeded at bringing people to town for powwows and educating the community.

“I know they have had some tough times, a lot of ups and downs,” Johnson said. “Everything has to start somewhere. We might just have to back up and re-plan a little.”