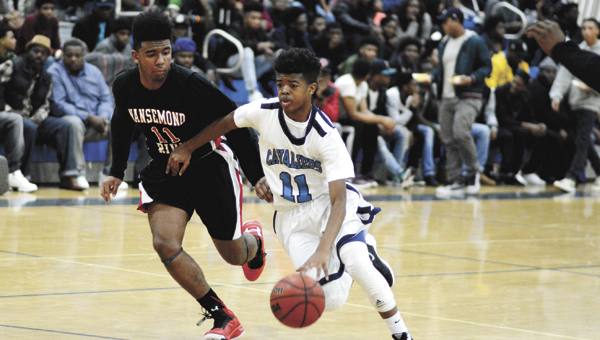 Spectators got the cross-city show on the hardwood that they were looking for on Thursday as Lakeland High School’s boys’ basketball team battled visiting Nansemond River High School and finished as 61-55 victors.

Entering the game, the Warriors and Cavaliers had records at .500 and .700, respectively, but Lakeland coach Clint Wright noted you throw out records in rivalry games.

“It’s all about who wants it bad enough,” he said.

The Cavs showed they did with a balanced effort on offense.

Strong passing led to the distribution of points as Lakeland generated 18 assists.

Wright was pleased to note that Lakeland has had five different players lead it in scoring through 11 games played this season.

“On a given night, you never know who’s going to be that particular one,” he said.

The Cavs led 17-12 after the first quarter and 29-26 at halftime, but the Warriors were up 43-42 at the end of the third, one of three different times they were up by a point during the second half.

Nansemond River coach Ed Young said he thought the story of the game for the Warriors was “probably our lack of execution at times on the offensive end, at times on the defensive end,” making it a struggle to beat a team as good as the Cavaliers on their floor, especially when they are playing well.

“I thought they played pretty good,” Young said of the Cavs.

Warriors senior guard Josh Covington led his team with 17 points and five assists to go with three steals, but he got most of his points at the line, struggling from the field where he went 3-for-10.

The Cavaliers came into the game with a plan to defend Covington, extending their 2-3 zone to help reduce his floor space.

“Just reducing the amount of court space that he had to operate in kind of limited him some,” Wright said, though he noted Covington, being a quality player, still had some success.

“In retrospect, he should have shot the ball a lot more,” Young said of Williams. “He’s been averaging about 12 a game for us lately.”

Given Williams’ and the Warriors’ three-point shooting ability, it was important for Lakeland to be poised in the waning moments of the contest.

“Going 4-for-4 from the free throw line within the last 56 seconds, I thought that helped us get over the top,” Wright said.

Nansemond River (5-6) plays on Saturday at noon against host John Randolph Tucker High School in Richmond as part of the eighth annual Virginia Preps Classic. The Warriors are looking for their first win at the Classic, holding an 0-4 record from previous years. 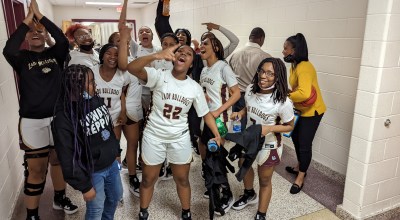