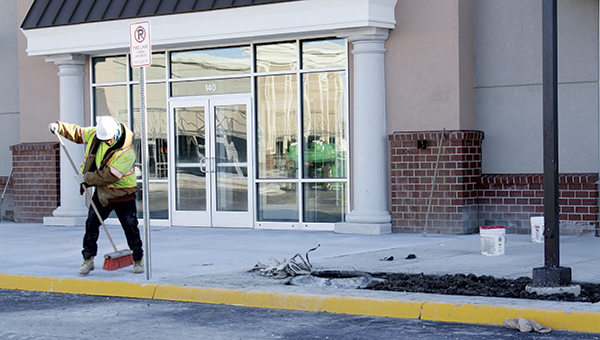 Michael’s Arts & Crafts will be the first business to set up shop in Hampton Road’s Crossing, Petco will be the second.

Michael’s, Petco, others to open soon

The metal fence that has straddled the Kroger Marketplace’s parking lot for the past year is gone.

The dozens of construction crews building the North Suffolk shopping center have disappeared, except for a handful of contractors laying sidewalks or landscaping.

Kroger — the anchor and founding store in Hampton Roads Crossing, a $20 million mixed-use development off College Drive — is getting retail neighbors during the next few weeks.

“I can’t wait to explore … especially the shoe store. There is less traffic to come here than go to the same stores on the Peninsula. That’s why I come here to buy groceries.”

Michael’s Arts & Crafts will be the first business to set up shop in Hampton Road’s Crossing, and the store plans to open in late February or early March, said John Peterson III, senior vice president of Terry Peterson Co.

His company is master developer of Hampton Roads Crossing, a 148-acre project that will include apartments and condominiums upon completion.

Petco, a pet supply store, is likely to be the second tenant of the 100,000-square-foot shopping center, he said.

When Michael’s moves into its new digs next month, the company will shutter its Chesapeake Square store, according to store personnel. That’s the third store in or adjacent to the Western Branch mall to announce closure plans in two weeks; Macy’s and American Eagle are also closing in coming weeks due to slumping sales in recent years.

Despite the disheartening outlook for Chesapeake Square, retail activity in North Suffolk is thriving.  According to Peterson, other retailers slated to move into Hampton Roads Crossing this spring include Ross Dress for Less, a discount department store; Ulta Beauty, a cosmetics and beauty products store that also has a salon; Five Below, a discount store that sells everything for less than $5; DSW Designer Shoe Warehouse, a shoe store; Great Clips, a hair salon; and Lavish Nail, a nail salon.

Two restaurants, Texas Roadhouse and Zaxby’s, are under construction on outparcels of Hampton Roads Crossing, Peterson said. Both are expected to open in April, according to their websites.

There are enough outparcels to accommodate five more standalone businesses, he added.

“The retail component is almost 100-percent leased … and we have a diverse group of tenants,” Peterson said.

“Space went quickly once we got the anchor in… and we had a number of business approach us that we had to turn away due to lack of space,” Peterson said. “It’s very unusual to have more demand than space.”

The shopping center fell into place once Kroger Marketplace signed on to the project, he said. A large grocery marketplace as an anchor draws smaller retailers looking to expand, he explained.

North Suffolk’s close proximity to Interstate 664 has helped fuel growth, Hughes said. The highway puts the city in the middle of a metropolitan area, easy to reach multiple markets easily, he said.

“Retail growth is also about residential rooftops,” Hughes said. “The more people you have, the more retailers, restaurants and medical service providers you need.”