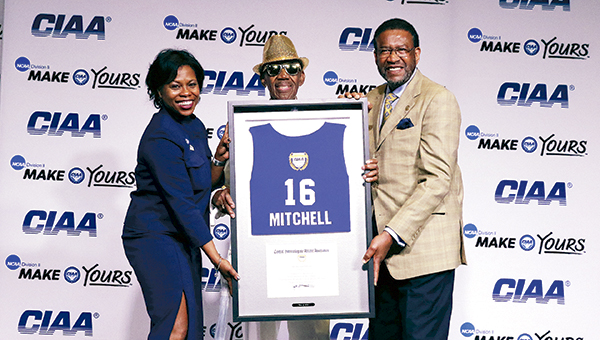 Abraham “Mr. CIAA” Mitchell, center, receives the John B. McLendon Hall of Fame award during a breakfast ceremony at the Charlotte Convention Center on Friday. Presenting the award on behalf of the Central Intercollegiate Athletic Conference are Jacqie McWilliams, commissioner of the CIAA, left, and CIAA Director Ronald L. Carter, president of Johnson C. Smith University.

Abraham “Mr. CIAA” Mitchell, a Suffolk native and longtime supporter of the Central Intercollegiate Athletic Conference, was one of 10 people inducted into the conference Hall of Fame on Friday in Charlotte, N.C.

The induction was part of the CIAA’s annual basketball tournament, held Feb. 23-27 at the Time Warner Cable Arena.

Mitchell, also known as “Ham” around his hometown, has been a fan favorite at the CIAA Basketball Tournament for more than three decades.

His pageantry of self-made ensembles in the colors of CIAA member institutions has garnered him the title “Mr. CIAA.” Mitchell was recognized in 2012 by the conference for 33 years of modeling his fashionable threads to the approval of countless fans during the tournament.

Mitchell began his infamous strut while his nephew attended his favorite Norfolk State University, a former CIAA member institution. He dressed up for the Spartans games he attended. Today, through the course of the tournament’s weeklong schedule of games, Mr. CIAA can be seen in a different outfit for each contest.

This year, he said, he brought 27 different suits to the tournament. He’s also progressed to the point at which, today, he’s got his own dressing room with security, he told an appreciative audience at Friday’s induction ceremony.

When asked why it took so long for him to receive his own dressing room, he remarked, “It may have been about jealousy — I took to much away from the game.”

“Receiving this award is one of the greatest accomplishments that I have ever received,” he said. “I was shocked when I received the letter informing me that I would be receiving the award.”

Panel says no to police secrecy