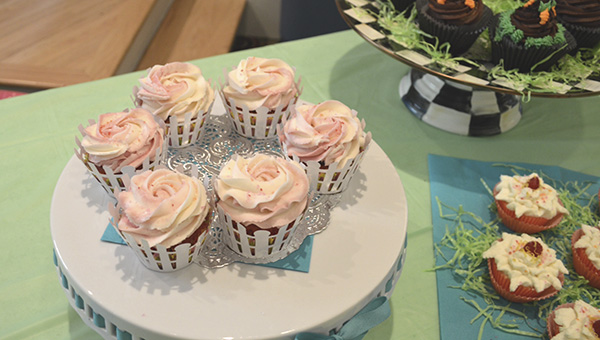 About 10 flavors of cupcakes will be available during Cupcake Wars at Lake Prince Woods on April 16. The event is a Relay for Life fundraiser.

Sugar and frosting will be the weapons of choice in the Cupcake Wars taking place on Suffolk soil this month.

Lake Prince Woods will host the April 16 fundraiser for its Relay for Life team. The fun gets started at 2 p.m., and seven baking teams will produce one or two flavors each for visitors to sample.

“We’re having the kids battle and the adults battle,” said Denise Brown, director of resident services at Lake Prince Woods. Three staff members, as well as some children and grandchildren of staff members, will make up the seven teams along with Sarah Smith, the co-chair of the Western Tidewater Walk to End Alzheimer’s.

“The most fun is the kids saying why they picked the cupcake they made,” Brown said.

Tables will be decorated in the theme of the cupcake flavor, and visitors will be able to vote for their favorite cupcakes based on taste and creativity. The event is modeled after the popular television show.

“I think I’m going to go for the peanut butter and jelly again,” Brown said, adding that was a popular flavor last year. Other flavors last year included a fruit-flavored cupcake with a spring theme.

“A couple of the teams are doing two different varieties, so there will be nine or 10 different types of cupcakes to sample,” Brown said.

Tickets, which include cupcake sampling and lemonade, are $5 and can be purchased at the door. Contact Brown at 923-5513 or dbrown@uchas.org for tickets or more information.