A 71-year-old Suffolk man has been arrested on a charge of threatening to bomb a building. 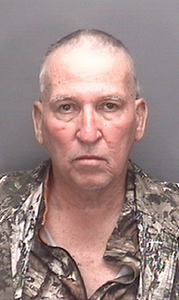 Louis Dell Highsmith was arrested Monday following a preliminary investigation related to incidents that occurred on April 7, according to city spokeswoman Diana Klink.

On that date, written bomb threats were faxed to a local attorney’s office, the General District Court and the Commonwealth’s Attorney’s Office, Klink said.

According to online court records, Highsmith was set to appear in General District Court Monday on a trespassing charge. That case has been rescheduled.

According to an arrest warrant filed in Suffolk General District Court, the fax included such phrases as “bombs away,” “man your battle stations,” “incoming” and “drop Big Bertha!” The fax mentioned April 8, the day after it was sent.

It was sent to local attorney Martin Speroni, the arrest warrant stated.

Klink said the fire marshal’s office is continuing to investigate, and no further information was available. Highsmith is currently in custody, she added.