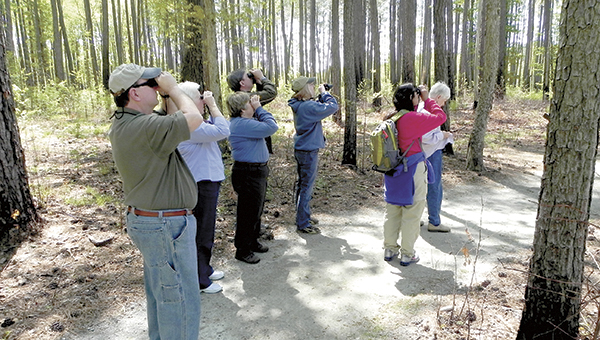 Birdwatchers use binoculars to look out for birds during a prior Birding Festival at the Great Dismal Swamp National Wildlife Refuge.This year’s event is coming up this year. (Submitted Photo)

This year’s birding festival is special in that it will commemorate the centennial of the Migratory Bird Treaty Act, said Deloras Freeman, visitor services specialist at the refuge.

In 1916, the first treaty was instituted to protect the birds.

“Their numbers were declining, especially the ones with the long, white, feathery plumes, because at that time they were using them for ladies’ hats,” Freeman said. 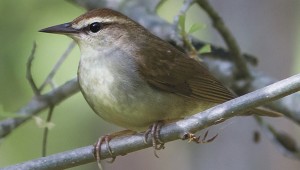 A Swainson’s Warbler, one of the most sought-after birds that can be seen in the refuge during the birding festival. (Submitted Photo)

“Our migratory birds travel basically the whole western hemisphere,” Freeman said. “If we don’t have cooperation between other countries, our results aren’t as successful as we want them to be.”

The 10th annual birding festival is one of the best opportunities to see many birds that migrate along the East Coast, as they make their way to their summer homes. It is also a good opportunity to see more of the refuge and learn about the flora and fauna that inhabit it.

Freeman said the No. 1 bird most hobbyists are seeking at the refuge is the Swainson’s Warbler.

“They occur elsewhere, but we have larger numbers, increasing the likelihood of one being seen,” she said.

People from up north also are looking for the Prothonotary Warbler, she said. “We have many, many of them. Almost everyone gets to see one.”

Freeman said the birding festival expands each year to accommodate more people who make the trip for the entire weekend.

“We’re getting a lot of people that travel in from out of state this year,” she said. “They have requested that we have more stuff.”

Saturday will include all of that, plus a wildlife survey activity, nature crafts and exhibits, a nature photography workshop and field session and a workshop on how to create a bird-friendly habitat in your backyard.

For beginners, a birding basics workshop and field session on Friday will be a good introduction to the hobby. A limited number of binoculars will be available for loan during the class, but those who already have their own should bring them.

Also Friday, a presentation about the return of the red-cockaded woodpecker to the Great Dismal Swamp will take place. Biologists re-introduced the endangered species to the refuge last fall.

“We can’t take people in to see them yet, because they’re still basically in their incubation period for settling in,” Freeman said, noting they are nesting in an area typically closed to the public. “Maybe next year we can have some tours down to see the woodpeckers.”

Exhibitors and vendors will also be available at the refuge headquarters throughout the event.

Registration is required for the workshops, presentations and tours, and many of them are already full, Freeman said. However, refuge staff begin taking a standby list an hour before each event.

“If someone doesn’t show up, we are usually pretty successful getting people in the event,” she said.

The refuge headquarters is located at 3100 Desert Road in Suffolk. Visit www.fws.gov/refuge/great_dismal_swamp or call 986-3705 for the schedule and more information.