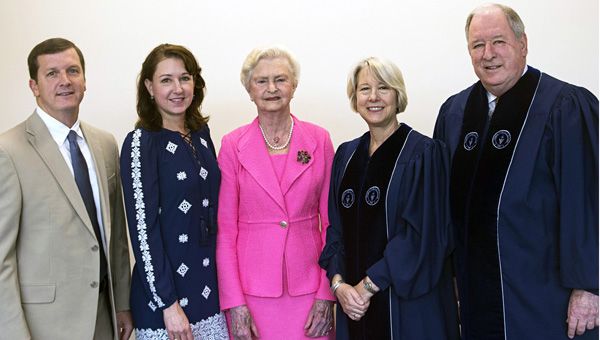 George Y. Birdsong of Suffolk was awarded an honorary Doctor of Laws degree during commencement ceremonies at Virginia Wesleyan College on Saturday.

The degree was conferred by VWC President Scott D. Miller; Board of Trustees Chair-elect David Kaufman; Timothy O’Rourke, vice president for academic affairs; and Kenneth R. Perry, dean of the college. The Birdsong Corp. and the Birdsong family have supported Virginia Wesleyan throughout the college’s history. Birdsong and his wife, Sue, trace their connections with the college back to the groundbreaking for Village I on July 18, 1965. George attended with Gov. Mills Godwin, and Sue attended with her father, who was the mayor of Suffolk at the time.

George’s uncle, Harvard, was a key participant at the groundbreaking and a charter member of the VWC Board of Trustees. George, now a trustee emeritus, continued the family’s involvement by serving as a trustee from 1989 to 2015 and chair of the Board of Trustees from 2007 to 2010.  Birdsong Hall, an original building in Village I, was dedicated to the Birdsong family in 1968. A plaque in the building recognizes the family as dedicated Methodists whose generosity helped establish Virginia Wesleyan College.

Birdsong Peanuts and the Birdsongs made a number of significant gifts throughout the college’s history.

Most recently, their commitment to Birdsong Field, VWC’s new multi-purpose outdoor synthetic turf athletic field, enabled the college to dedicate the facility in fall 2015 in honor of the Birdsong Family. George Birdsong has been involved in many civic organizations, including the Obici Healthcare Foundation, Suffolk Foundation, United Way, YMCA and Nansemond-Suffolk Academy.

He is active in numerous regional and state organizations such as the Virginia Foundation for Independent Colleges, Chesapeake Bay Foundation, Nansemond River Preservation Alliance, and Hampton Roads Business Roundtable.

He has received a multitude of awards including a Humanitarian Award from the Tidewater Chapter of the National Conference of Christians and Jews, the ODK National Leadership Society Award and the Paul D. Camp Community College Chancellor’s Award for Leadership in Philanthropy.

He was recognized with a Lifetime Achievement Award for initiating and serving as the first chairman of the Suffolk Redevelopment and Housing Authority. In 2015, he received the Lenora Mathews Lifetime Achievement Award from VOLUNTEER Hampton Roads. Birdsong earned a bachelor’s degree from Washington and Lee University, a law degree from the University of Virginia, attended the University of Virginia for Basic Advancement Management and practiced law with Godwin & Godwin Law Firm. The Birdsong Corp. is the largest privately owned peanut sheller in the U.S.

George and his wife, Sue, have three children and eight grandchildren. Virginia Wesleyan also awarded an honorary Doctor of Humane Letters degree to Director of the Peace Corps Carrie Hessler-Radelet, who served as the college’s 2016 commencement speaker.