Christopher Alan Hogge, the director of the Franklin Department of Social Services and the pastor of Battery Park Baptist Church in Isle of Wight, has been arrested on charges of child pornography, according to the Isle of Wight Sheriff’s Office. 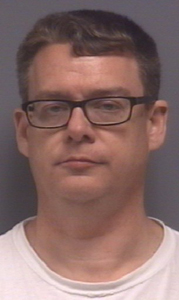 According to Potter, sheriff’s investigators received a tip earlier this month from the National Center for Missing and Exploited Children, through the Bedford County Internet Crimes Against Children Task Force, that an internet account in Isle of Wight had been used to access an online social media account that was hosting multiple images depicting child pornography and exploitation.

Local investigators assigned to the Special Investigations Section uncovered evidence to secure eight felony warrants. On Monday afternoon, Potter stated, search warrants were being executed at various locations in Isle of Wight and Franklin in connection with the case.

“The Isle of Wight County Sheriff’s Office appreciates the cooperation of the City of Franklin during this investigation,” Potter stated.

He said the investigation continues, and additional charges may be sought after evidence is examined.

Hogge is being held at Western Tidewater Regional Jail on a no-bond status, Potter stated.

The Bedford task force is one of two in Virginia specializing in investigating internet crimes against children. It serves as a clearinghouse for investigations throughout southern Virginia and Hampton Roads.

Hogge has been the pastor at Battery Park Baptist since 2001, according to a biography appearing on the church website.

A Suffolk man has pleaded guilty to charges of distributing more than 220 pounds of marijuana in a conspiracy with... read more