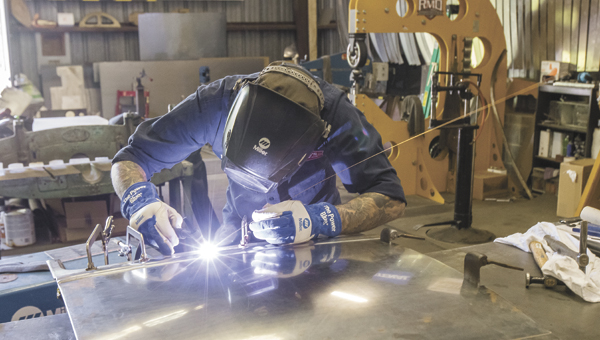 Kyle Yocum welds the skirt on a door panel created from scratch in his shop on Progress Road.

Kyle Yocum seeks to reflect light in everything he does, from the way he shapes metal to the way he lives his life.

The owner of Yocum’s Signature Hot Rods on Progress Road is a custom metal fabricator who loves to see the way the sunlight glistens off the curves and shapes in a car’s body.

“Cars are attractive because of the way light reflects off of them,” he says in his office, the one place in the building that’s relatively free of the noise of the power hammer and the dull gleam of light streaming into the cavernous workshop and reflecting from numerous antique vehicles in various stages of rust and refurbishment. 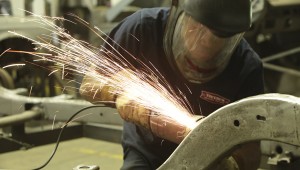 Josh Hardy takes a grinder to the frame of a car, one of many projects Yocum’s Signature Hot Rods has in various degrees of completion.

Kyle Yocum grew up in Ohio with an entrepreneur father, a master carpenter who owned his own business and set an example for his like-minded son.

“I’ve never really seen myself doing anything but owning the business where I worked,” Yocum says.

He started bending and shaping metal at the age of 15, when he acquired his first car, a ‘72 Chevelle.

He moved to Virginia for a job at someone else’s shop in Norfolk, where he worked for four years. He started Yocum’s about three years ago at a shop in the Saratoga area and moved to Progress Road a little more than a year ago.

“We specialize in designing or re-creating things that either aren’t available in the after-market or things we’ve designed from scratch,” Yocum says.

The process starts with sheets of 18-gauge steel from BMG Metals in Chesapeake. The shop keeps a variety of tools to shape the metal, but Yocum’s favorite is the power hammer, which pounds the metal between shaped dies as he moves it. 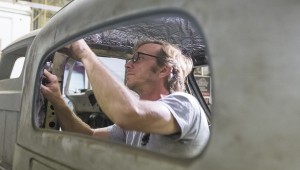 Eric Mickelson goes over his work carefully after having pulled a dent out of the inside of a truck cab at Yocum’s Signature Hot Rods on Progress Road.

“I find the power hammer is, for me, more accurate and faster,” he said.

The shop can do anything from replacing a missing piece of sheet metal to building a custom car from scratch.

The jobs that come in are widely varied and can take up to three years to complete, depending on how complicated they are. There’s the Antique Automobile Club of America show cars, on which every single nut and bolt has to be the right color. There’s the folks who want their antique cars to be their pride and joy again. There’s the jobs from other shops that need to be fixed.

There’s the 1929 Dodge Phaeton ­— “As far as we know, it’s the only one left in the United States,” Yocum says — that’s here for a restoration. There’s a ‘55 Chevy truck, a ‘55 Thunderbird, a ‘46 Studebaker, and even a car that’s recognizably a Mustang, even to an untrained eye.

“As far as restoring cars, they’re one of the cheaper cars,” Yocum says of the Mustang. “We don’t have to build very much for those cars.” 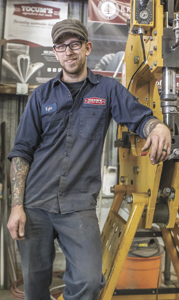 Kyle Yocum started bending metal at the age of 15. He started his business in Suffolk about three years ago and considers the power hammer he’s leaning on here his signature tool.

One of the most high-profile jobs the shop has done was for Thomas Edison’s son. They restored his 1937 Brewster for display at the Edison estate, Yocum said.

They farm out engines, interiors, paint and so on — everything but the metal — to specialists.

There’s only a couple of caveats: the shop doesn’t work on anything newer than 1973, and the four guys who work there, including the owner, don’t do anything less than their best.

“We can do just about anything you want, as long as you want it done right,” Yocum says. “All my guys are high-skilled guys, the best I can find.”

For a man this consumed with perfection, nothing that rolls off the assembly line will ever be ideal.

“My favorite car will be the one I’m going to build,” he says, though he admits the mid-’60s Ferrari GTO “had some really nice lines.”

“I like shapes. I can appreciate any car that’s got a lot of interesting shapes.”

It’s all about how the shapes reflect light. And Yocum makes sure that he shapes himself and his business in a way that reflects a different kind of light — the light of Jesus Christ.

“We’re Christians, and we try to run our business the way Jesus would want us to run our business,” he said. His wife, Jerri-Lynn, comes in the afternoons to do the books, and their three little girls — ages 4, 2 and 4 months — contribute to the noise in the shop.

“Our faith is a big part of everything.”