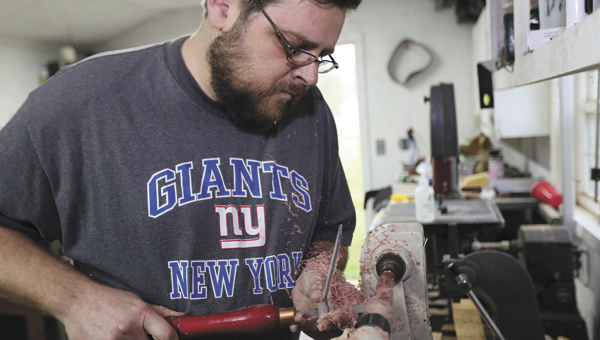 Ed DePietro holds a cutting tool to a Lumalite block that will soon be shaped into a comfortable and unusual writing instrument, all from inside a tiny shop near Holland.

Ed DePietro bends over the lathe on a workbench in a small, cluttered shed behind his house on South Quay Road.

Holding a cutting tool with his left hand and steadying it with his right, he moves in to work on a rectangular block of Lumalite that is clamped to the lathe and spinning at a couple of thousand revolutions per second.

With the first touch of the tool to the rust-and-white, marbled, plastic-like block, pink shavings begin to fly. Within a few seconds, as DePietro carefully moves the cutting tool along the block, his shirt — and then his beard — have picked up strands of the material. The workbench quickly fills with the shavings. 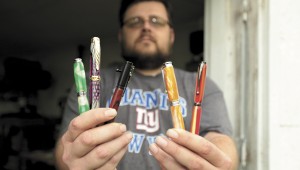 Ed DePietro’s pens come in all shapes, sizes, weights and colors. He’s created thousands of them since he took up the hobby and markets them mostly on Facebook, where you can find him at Ed’s Handcrafted Pens.

Within a few short minutes, DiPietro’s efforts have transformed the block of Lumalite into an oval tube that will soon be the bottom of a special-made pen. He then turns his attention to the Lumalite blank that will be used for the top of the pen.

Since he started turning pens, DePietro, a scheduler for the shipyard, has done this a couple of thousand times, he says. “I think about half of them are in my wife’s purse.”

Pens were not what he originally had in mind when he got his lathe — he’d planned to make chess pieces at the time. But he saw some videos online about making pens and decided to give it a try.

“I got the lathe, and I sat on the floor and did it,” he says. “You can see a definite improvement from then to now.”

Still, it’s likely there’s something genetic — or at least ingrained from an early age — in DePietro’s artisanship.

He grew up with his grandparents. His grandfather was a maintenance manager at Planters, and he spent a lot of time around his grandfather’s tools as a boy. 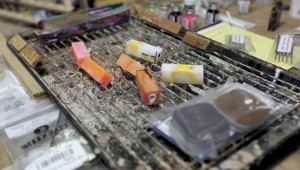 Pen blanks with barrels already drilled into them and tubes already glued inside are ready for machining.

“I remember being in the shop with my grandfather, sanding so much,” DePietro says as he works a piece of wet sandpaper along the length of a spinning pen top. “He had a philosophy: You can never sand too much.”

If the many different types of sandpaper on his shelf can be taken as evidence, it’s a philosophy DePietro has taken to heart.

Before long, the two rough, oval tubes are silky smooth, ready for the sealing coat that will keep them shiny.

Rustling through cubbyholes and drawers where he keeps dozens (maybe hundreds) of pen blanks made from wood, Lumalite and other materials, DePietro finds the pen parts that will go inside the barrel drilled into the pen blank earlier.

With a few practiced motions, the whole thing has come together, and what was once a couple of indistinct hunks of plastic has become a fine writing instrument — one that he can sell online or at retail for about $20. He’s sold his pens, mostly via social media, to clients from Michigan to Florida to New York. 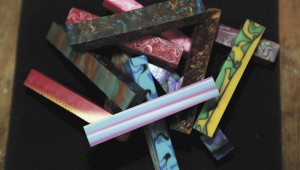 DePietro probably has hundreds of different pen blanks waiting to be transformed.

“A lot of it is not so much that ‘Neil Armstrong used it on the moon’ so much as it’s about family heirlooms.”

In fact, one of his best customers is his wife’s cousin, who has between 70 and 100 of DePietro’s pens.

“He wants to have one to match every tie.”

Kyle Yocum welds the skirt on a door panel created from scratch in his shop on Progress Road. Kyle Yocum... read more