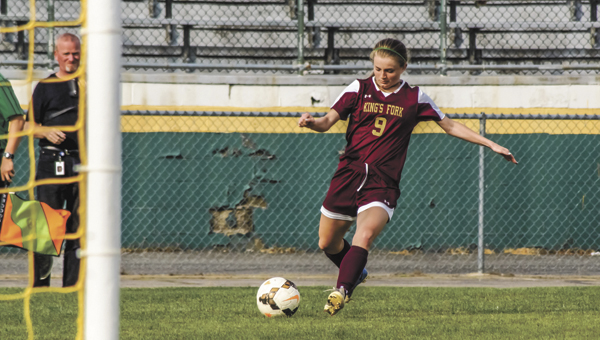 After winning the conference title the night before, the Lady Bulldogs beat Wilson to advance to the Conference 17 finals on Friday evening. Lead by Rebecca Washburn controlling the middle and Ashley Bido playing center back for the first time, the Lady Bulldogs were poised to take the victory, increasing their win streak to six.

Coach Mike Marston sees his girls as improving and starting to show their true potential.

“I’m really excited about the way that they are thinking on the field,” said Marston. “They are able to adjust to how the other team is playing and decide if they are just going to completely control the ball or play a smart defensive game.”

The Lady Bulldogs gave up a corner kick and a free kick goal to make it 2-1, Wilson’s lead. After some coaching on the sideline, King’s Fork was able to regroup and score a goal before the half, tying the game at 2-2. It was when they stepped back on the field that King’s Fork proved to be the better team.

“We completely controlled the entire second half,” Marston said. “We scored three goals to go up 5-2. When we reached that point with 10 minutes left, I pulled my starters.”

When describing his team’s improvement from the previous match to this one, Marston saw a more mentally sharp and organized team.

Cydney Nichols scored two goals, Katelyn Woods had a goal, Alyssa Vick had a goal and Rebecca Washburn and Emma Marston each had an assist. Marston saw improvement from his girls in the games leading up to the conference final but realizes this is not where it stops. He has bigger goals for his team going forward.

“It would be great for us to win the postseason, but honestly, staying sharp and staying focused for regionals are more important for us,” Marston said.

King’s Fork will play in the Conference 17 finals on Friday, May 27, at Deep Creek High School.