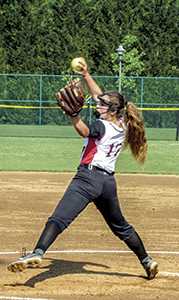 The Lady Warriors played in the PenSouth conference tournament championship against Gloucester High School on Thursday. In an afternoon that brought a lot of expectations, the Lady Warriors did not disappoint.

Nansemond River won their semifinal game against Menchville the night before, beating them 8-1. Rogers was excited about the victory but knew his girls had more to offer.

Led by pitcher Misty Even, the Lady Warriors pressed on the gas and never let up.

“Misty is our freshman pitcher who’s been playing JV,” coach Gabe Rogers said. “We brought her up for the tournament, and she stepped up and played a phenomenal game tonight.”

In the first and second innings, both teams remained scoreless. In the top of the third, Nansemond River started turning it up.

Maddie McGrath made a hit, making way for two runs that put the Lady Warriors up 2-0. Lauren Davis then hit a fly ball, allowing two more players to score.

“They played awesome,” Rogers said. “They are great ball players, and they proved it tonight.”

In the top of the fourth, Gloucester hit a home run, scoring its only run and making the score 4-1.

In the bottom of the fourth, Calah Savage made way for two more scores, increasing the Lady Warriors’ lead 6-1.

Nansemond River clamped down even more in the fifth and sixth innings, not allowing Gloucester a score. It was in the seventh that Gloucester started showing some signs of life, but the game was well in hand, and Nansemond River cruised to the win.

Senior Lauren Maddrey was announced as the PenSouth player of the year. Rogers also received an award being named coach of the year for the conference.

“I’m happy for winning it, but it’s not about me,” Rogers said. “If you want to know the true coaches of the year it’s the other coaches. Those guys are the backbones of what I do. They are supportive and give great advice. We our blessed to have such knowledgeable coaches on our staff.”

Rogers understands the depth and talent that lies on his roster.

Looking ahead to regionals, Rogers said, “We want to win, and we want to advance to states, but the reality of it is that we want to play good softball. We have a tough game against Kempsville on Monday. We want to play there like we played tonight and hopefully take it from there.”

The Lady Warriors play in regionals on Monday against Kempsville High School.