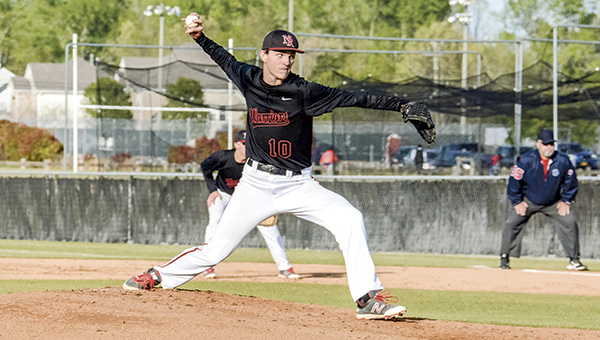 Nansemond River High School senior Mike Blanchard pitches against visiting Grassfield High School in a game earlier this season. He helped propel the Warriors to a win this week to advance to the title game Saturday. (Melissa Glover photo)

The Warriors scored one run each in the second, third and fourth innings. Coach Mark Stuffel believes his team matched up well against Gloucester.

“I feel like we had a few more tools than they did, but they were a very good team,” Stuffel said. “They did everything the right way, and they were a tough team to beat.”

Led by pitcher Michael Blanchard, Nansemond River put up a solid offensive and defensive effort described by Stuffel as a well played game all around.

The Warriors are currently 15-7; one of those losses came from Menchville earlier in the season. The team is looking forward to playing the Monarchs again, giving everyone an opportunity to see how much progress they’ve made since their last meeting.

Stuffel can’t wait to see them again. “The first time we played them, Menchville beat us, so having a chance to play them again is a good thing,” he said.

Stuffel said the goal is to play good baseball around this time of year, and he believes his team is doing just that. The Warriors’ goal is to win states, but in order to do that, they have to continue playing the way they currently are. There is always room for improvement, and Stuffel believes that improvement is something that can aid them going into the conference championship game.

“We’ve got to stay consistent at the plate and continue to play great defense,” Stuffel said.

Police reports for May 26