Memorial Day weekend in Suffolk began Saturday morning with a ceremony by the United Daughters of the Confederacy in Cedar Hill Cemetery, which featured the dedication of a new headstone for a Confederate veteran buried there and an appearance by one of his descendants. 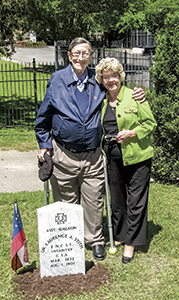 Laurence Stith and his wife, Jean Stith, pose for a photo at the new headstone of Dr. Laurence A. Stith, his great-grandfather, at Cedar Hill Cemetery on Saturday.

The Civil War dead were the first to be commemorated on a special day, even as the war still raged. The name and date of the commemoration have since changed, now known as Memorial Day and paying tribute to all military men and women, from the Revolutionary War to modern conflicts, who have given their lives in defense of their country.

“We do recognize the people who left their homes,” said Dr. Brian Steel Wills, the guest speaker for the event. “They went off to fight for what they believed in. These core values included defense of home and love of family.”

Wills, a Suffolk native who is director of the Center for the Study of the Civil War Era and professor of history at Kennesaw State University in Georgia, urged folks not to disparage the sacrifice of soldiers who died not in battle but rather through illness, drowning, train accident or other causes.

“More people died of disease than any other factor,” he said. “Don’t forget those poor soldiers who lay on a cot and that was the last of their service. History is not just the glamorous and glorious and high and mighty. History is all parts of it.”

The ceremony also dedicated a new headstone for Dr. Laurence A. Stith, who served as assistant surgeon in the 2nd North Carolina State Troops infantry. 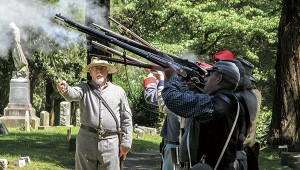 Re-enactors give a rifle salute during the United Daughters of the Confederacy’s Memorial Day ceremony in Cedar Hill Cemetery on Saturday.

Stith was born in 1832 in Buckingham County, N.C. His father and uncle were also doctors, and he followed in their footsteps.

He joined the Confederate war effort at age 29 but lost his arm while moving injured soldiers from a train to an ambulance.

“He could have easily sat out the rest of the war, or even quit doctoring altogether,” said Billie Earnest, who related Stith’s story during the ceremony.

But he didn’t. He re-enlisted after he recovered and continued to serve until near the end of the war.

In 1878, Stith moved to Suffolk after marrying a Suffolk girl, and they made their home at 28 Bank St. The couple had three sons, who served in the Spanish-American War.

He died on Aug. 1, 1901, after being in failing health since January of that year. His wife died more than two decades later.

“He was a man of tougher character,” said Richard F. Barnes Jr., who has spent years researching Stith’s regiment. “He saved many men in the heat of battle.”

Stith is buried in Cedar Hill Cemetery, but until recently, his grave was marked only by a tiny stone, weathered with age.

Lee Hart, a member of the Sons of Confederate Veterans who spends much time and effort researching and restoring gravesites of Confederate veterans, cleaned the small stone and moved it to the foot of Stith’s grave. He donated a marble marker to be Stith’s new headstone, and the United Daughters of the Confederacy paid for the lettering.

Hart said he has determined Stith’s wife is buried beside him in an unmarked grave, and he hopes to be able to get a marker for her soon. One or two children may also be nearby, he said.

Laurence Stith, the great-grandson of the doctor buried in the cemetery, and his wife Jean were on hand for Saturday’s ceremony. Despite using a walker, Stith made it to the gravesite, on a hill near the front of the cemetery, to view the new marker.

He said this weekend’s visit has been his first time spending any time in Suffolk besides passing through, despite the fact his family is from here. He’s a native of New Bern, N.C., and now lives in Morehead City.

Volunteers young and old are needed to participate in Suffolk’s Clean the Bay Day effort on Saturday. From 9 a.m.... read more