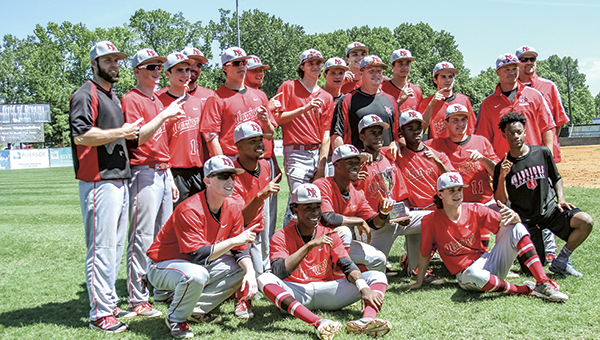 The Warriors celebrate following their win against Menchville Saturday.

The Warriors utilized three pitchers to secure the victory against the Monarchs. 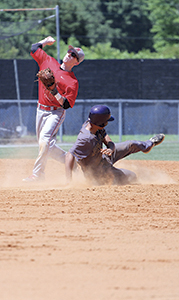 Nick Lees of the Nansemond River High School Warriors throws from second base during Saturday’s win against Menchville for the district championship.

Coach Mark Stuffel is excited for his team going forward.

“Everybody played really well in the whole tournament,” he said. “Everybody attacked every pitch at the plate, and the defense was as good as it could be.”

Stuffel said the beginning of the game set the tone for the remainder of the match. In the first inning, Dion Jordan walked and Jarret Mayer got hit by a pitch, putting runners on both first and second base. The Warriors then bunted, allowing runners to reach second and third.

Mike Holtz followed that up with a line drive down the middle, forcing two runs. The Warriors would score two points in the first and three in the fifth, giving them their 5-1 lead.

The Warriors were excited about their victory after the game. Stuffel saw youthful exuberance from his team upon beating Menchville.

“They were cheering and jumping around like they had just won the championship,” said Stuffel. “Winning the conference is awesome, but it’s not the team’s goal for the year.”

The Warriors play Hickory High School at Hickory at 4:30 p.m. Monday. Hickory beat Nansemond River earlier in the season 15-5, but Stuffel has full faith in what his team can accomplish, having seen what they have already done to reach this point.

“If we can play the way we played the last four or five games, we can be competitive with anybody,” said Stuffel. “We just need to stay consistent with games we’ve been playing.”