The Lady Warriors were in a tight competition until the sixth inning, when they were able to break the game open. 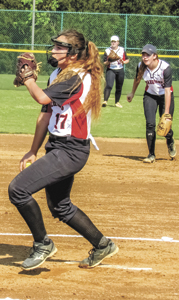 Misty Even, pictured here in a prior game, helped the Nansemond River Lady Warriors hand Kempsville a 7-1 defeat on Monday. (File Photo)

It started with Lauren Davis hitting the two-run home run, to be followed by two walks. Ashlyn Rogers then came up and hit a double, scoring two runs. Ashlyn never stopped running, scoring herself.

“I’ve pretty much had the same team for the past three years,” he said. “A lot of these girls I’ve had as a freshman, and now it’s four years later. We knew then that we had some talent, but the reality is you’re only as good as your last game.”

Rogers understands the anxiety his team might have had, being faced with elimination, but recognizes they handled it well.

“We have a lot of upperclassmen, so they’ve been here before and they’re kind of comfortable with knowing who they are, so they do a really good job of keeping each other loose and maintaining normalcy,” said Rogers.

The Lady Warriors next face Hickory High School, who beat them 8-5 earlier in the season.

“I think the girls are pretty comfortable,” Rogers said of the upcoming game. “We know what they have, they know what we have, so there’s not going to be any real big surprises. It’s going to be two very evenly matched teams getting after it. We are just excited to have the opportunity to be in the game.”

“We will make adjustments during the game where we will try to get timing and location down, and that will help us develop a plan going forward,” Rogers said. “All in all, we’ve been doing pretty well with that this year.”

But Nansemond River is not taking anything for granted. Having gone to the state semifinals the year before last and not making it last year provided motivation.

“We weren’t clicking, we weren’t doing things well, and Glen Allen came down and knocked us out of the first round,” Rogers said. “We learned a really good lesson from that, and it’s that you can’t take anything for granted.”

Two lovely ladies who lost it all

By Frank Roberts Mary Eaton and Frances Farmer were beautiful and talented stars of the ‘30s and ‘40s, and they... read more